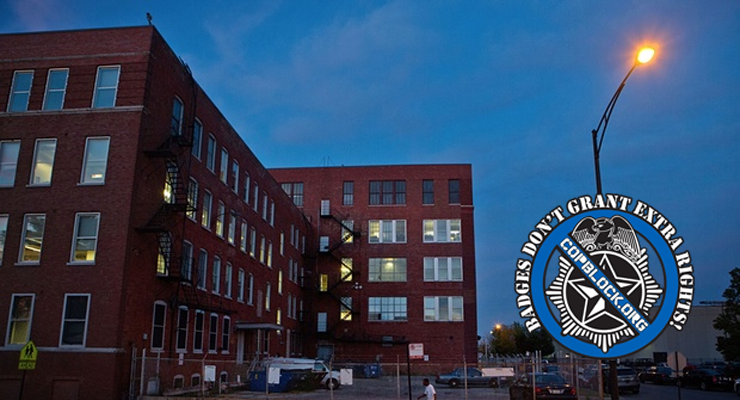 Chicago PD’s shady Homan Square facility yet again exemplifies its moniker as “a black site”. The detention compound, unveiled last year by the Guardian newspaper, is now involved in a gang trial. Interestingly, federal prosecutors are attempting to block a former police commander from being questioned regarding his role at Homan Square.

After the Guardian’s first articles, Chicago officials organized an elaborate P.R. campaign to protect the facility. Homan Square is occupied by Chicago PD undercover drug and vice units, as well as SWAT teams. A ballistics lab and, officials were careful to point out, a public “lost and found” are also present at Homan Square. Besides this, however, the plain brick building’s purpose was largely unclear to those living nearby.

Homan Square was also used as a short-term detention and interrogation facility. Dozens of interviews with former detainees were conducted by the Guardian, The Fifth Column, and other outlets. Not only were many of them disturbing, and reminiscent of military rendition, but they were consistent. Looking back, it’s difficult to tell whether the interrogations disturbed citizens more than Chicago’s lack of comment.

One of the first interviewees was activist Brian Jacob Church. Church reported being taken to the facility after a protest action, and questioned without a lawyer. Officers then allegedly placed him in a large floor-to-ceiling metal cage for hours. Two other anonymous detainees also described the cage, and being chained to a bench.

Another man, 31 year old Brock Terry, was allegedly arrested with 5 ½ pounds of cannabis. Upon being taken to Homan Square, Terry was denied a lawyer, and wasn’t booked. No public notice was provided regarding Terry’s arrest, as with thousands of others. “I sat in place for three days”, he recalled, “no talking, no calls to nobody.” After the ordeal, Terry was properly booked and processed at another station.

Two other detainees, Kory Wright and Deandre Hutcherson, were arrested in 2005. They reported being tied in crucifix-like positions, echoing pictures which leaked from Iraq’s Abu Ghraib prison. Hutcherson reported being punched in the face by officers, stepping on his groan “like he was putting out a cigarette.”

During Wrights interrogation, officers asked questions regarding murders and weapons. As a means to get information, they “turned up the temperature” while he was zip tied. Temperature torture also happens to be on the military and CIA’s list of interrogation methods.

Many others consistently reported seeing military-style vehicles in the facility. Lawyers who attempt to locate their clients are given the run around, and denied entry. One, who was able to get inside, reported passing by a room officers called “the wire room”. One detainee, Jose Gonzalaz, was essentially abducted from his home by undercover officers and disappeared for days. Officers eventually released him with no charges, and forced him to walk home across Chicago.

At least one Homan Square death is recorded–John Hubbard, dead of a heroin overdose inside the compound. Hubbarb was taken to Homan by undercover officers who posed as heroin dealers. It’s unknown what he was asked, or how he received the heroin that killed him while in custody.

This has lead to suspicions that officers injected Hubbarb, possibly to make him more compliant for questioning. Similar accounts of officers threatening detainee’s with heroin injections were also reported. Protests, and calls for a DOJ review by residents and city officials followed the Guardian’s extensive coverage of Homan.

Homan Square’s disclosure coincided with a police commander resigning from the force. That commander, Nicholas Roti, was also called to the stand during this most recent gang trial. Prosecutors,the Chicago Sun-Times reports, hope to incarcerate six members of “the Hobo’s”. Officials say Hobo’s are a blood-happy collective which held down Chicago’s streets from 2004-2013. Commander Roti’s knowledge of gang activity, prosecutors say, is highly relevant to the case.

Defense lawyers find Homan Square–which has a stated role in gang operations–just as relevant. Federal prosecutors disagree, and are now attempting to block questions on the facility from the courtroom. Assistant U.S. Attorney Timothy Storino, a prosecutor, feels connecting Roti to Homan is “tenuous at best.” Roti commanded a unit based at Homan, and retired shortly before a lawsuit against the Square was filed.

Interestingly, defense attorneys want to reference one specific Guardian article. The exchange, however, ignores the numerous other Guardian reports on the facility. Pieces which detailed, more specifically, accounts of torture and quiet brutality at Homan. Arguably, the tactics of Homan Square officers, who may or may not be involved in the “Hobo” case, are relevant. Very quickly, the case is building into yet another blast aimed to blow Homan’s skeletons out the closet. Even if the facility isn’t referenced in this case, there’s no disappearing what people already know.