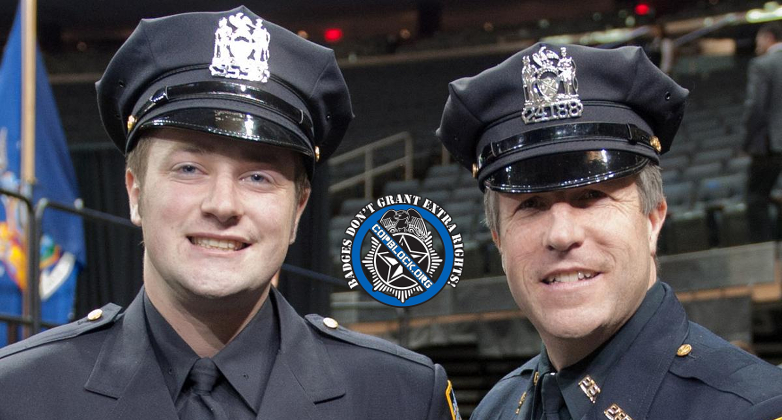 NYPD Officer Kevin Lynch, the son of Pat Lynch, the biggest Hero in New York and also the president of the New York Patrolmen’s Benevolent Association, has been placed on “modified duty” after he and a rookie officer were involved in an incident with a firearm and subsequently failed to report it.

The younger Lynch was with Officer Robert Smilove in a car belonging to Smilove’s mother near her house in Queens when the incident happened. Smilove reportedly had just bought a new .38 caliber revolver and was in a hurry to show it off to his work buddy. While doing so, he managed to accidentally fire off a round.

Obviously, these Heroes, especially the one with the golden pedigree, did the proper thing and waited for police to arrive so they could explain the situation and, if necessary, accept their slap on the wrist, right? Actually, not so much. Instead, Lynch the Younger and Officer Smilove jumped out and ran away into the night. In the process, they abandoned the car belonging to Smilove’s mother, which had a fresh bullet hole in the windshield. Not surprisingly, the NYPD was able to figure out who might be involved (without even calling in Columbo) by simply running the plates on the car. After walking a block or so, they found Smilove at his mother’s house where he also lives. (Apparently, these rookies aren’t quite on the gravy-train yet, salary-wise.)

Once the great getaway was over and Smilove was cornered in his mommy’s house, he apparently confessed and provided the gun, which had four live rounds and the one expended casing still inside the chambers. According to the New York Daily News, “It’s not clear how police learned Lynch was present.” I’m guessing someone crossed the Thin Blue Line, but that’s purely speculation on my part at this point.

The NY Daily News story also states that Officer Smilove hadn’t reported to the NYPD that he had bought the gun, which apparently is a requirement. Smilove has been suspended as a result of all this. There’s also a rumor started by me that his mother has put him on restriction and taken his cell phone away. He has only been on the force since January of this year and is still on probation with the department. According to a “high-level source” he isn’t expected to be celebrating his anniversary, although no official punishment has been meted out yet. It’ll probably be several months before he gets hired by another department once his termination becomes official.

As for Little Lynch, he’s still on the force and is not expected to be fired as a result (surprise). However, until they come up with a way to make it sound like the slap on the wrist he will receive was a legitimate punishment, he has been reassigned to the proverbial desk duty.