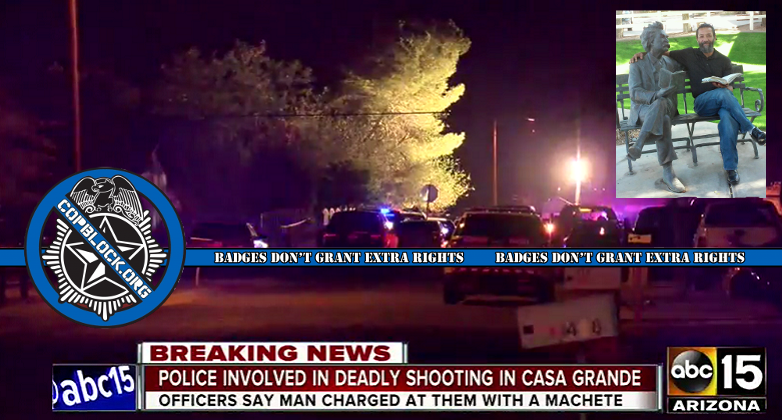 The following post was shared with the CopBlock Network anonymously, via the CopBlock.org Submissions Page. The person who submitted it is a family member of Gabriel Parker. Earlier this month, Gabriel was shot by three officers from the Casa Grande Police Department after another family member called to report that he was threatening to commit suicide. Within the post, the family disputes the official story of how and why Gabriel was shot, as well as the necessity of the shooting.

As has been noted here at the CopBlock Network many, many, many times before, the worst thing you can do for a friend or family member who is suffering from a mental health issue and/or severe emotional episode is call the police to “help” them. Unless you’re okay with the possibility that the person you called the police on might be beaten, arrested, and/or killed, you should never call the police. More often than not, they are neither trained nor of the mindset to actually help people who are mentally ill or suffering from suicidal depression. Instead, they generally see them as a threat that must be eliminated and usually that means permanently and violently.

On November 18, 2016 at 3 pm, the cops received a call from my cousin that my uncle Gabriel Parker was threatening to kill himself, he told them to be cautious because he had a machete. The news and public information officer (see embedded video below) make it seem like when they showed up he came out unarmed, went back into the house, and came out with the machete. They shot him with the bean bags and tazer and after he still didn’t comply they used lethal force. This is not what happened. Gabriel was inside the house. The police cars pulled all the way into the driveway and stood about six feet from the porch (knowing he had a machete inside). The other officers lined their vehicles outside the yard and aimed AR 15 rifles toward the house.Instead of talking him down they provoked him repeatedly, asking him to come out. After back and forth yelling between Gabriel and the officers he stepped out of the house for the first time, machete in his hand. He was immediately fired upon with rubber rounds and lethal bullets from three officers. He tried to take cover, collapsed and was taken to Casa Grande Banner Hospital. He died from his wounds enroute to the hospital.

Gabriel’s oldest son, sister in law, sister, brother, two nephews, and mother watched this entire incident happen. They asked the police to put down the lethal weapons, they stated they were going to wait for a crisis team to arrive. He was dead within 20 minutes of the cops arriving. Never once did he ask the cops to kill him, never did he charge at them.

He was a loving person, he’d give his shirt off his back to anyone.