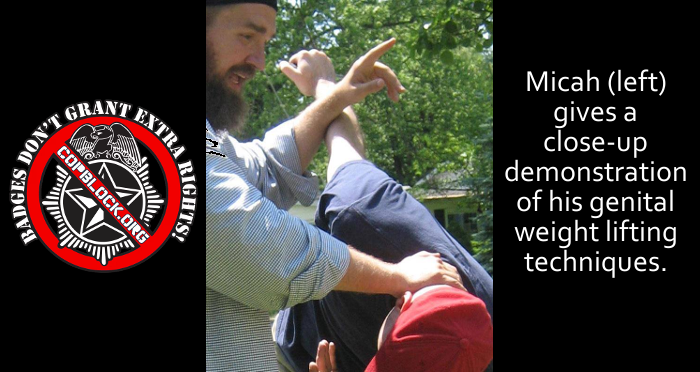 Recently the founder of Counter Current News and several other highly questionable websites wrote a ridiculous missive about his experience with Cop Block, so I spoke with him via skype last night hoping we could clear some things up.

Joshua: Hello Micah, thanks for speaking with me.

So what have you been up to?

Oh, you know, this and that. I am working on two doctorates, teaching half a dozen martial arts, raising kids, genital weight lifting and of course – all of my activism online and off.

Yeah, brother? You haven’t ever tried it? Man, you are missing out. I went from 6 inches to 7.5 since spring on my regimen and have never had a stronger penis.

Hmmm…well, did you lose any girth?

Okay, well, we both know why you are here. The recent split between you and your website, Counter Current News, with the Cop Block Network and affiliate program did not exactly end well.

You got that right, brother.

Well I pretty much explain it all in that blog you are talking about, but basically after carrying the Cop Block Facebook page for years I was tossed out for being too truthful.

Yeah, well it was explained to me that my articles were “race-baiting”.

Isn’t there some truth to that, though? I mean, I am not going to deny that race plays a part in the discussion of the police state. It most certainly plays a part of the socio-economic class divisions, which play the most critical role in selective policing of the poorest people. But your headlines and introductions seemed to rely on evoking outrage about race in order to get likes and hits rather than address the deeper issues in a more reasonable manner.

That is just your opinion, Joshua. You cannot prove that I was doing that.

Yeah, well that is another thing. You always use words like ‘proof’ or other buzzwords of certainty to give your own perspectives and opinions extra undeserved weight. Are you sure you know what proof means?

Seriously, dude? Proof is the ability to demonstrate with certainty that something is true.

Actually, that is not what it means. Proof is only relevant when discussing axioms. Empirical knowledge works just the opposite, rather than finding the final answer, it seeks to always replace statements or models with better ones.

Well, you know what I mean. I can’t get into semantics whenever I write a title.

That is just your opinion. I thought Cop Block was about different perspectives and free speech, not about money and Ademo’s habits.

I always find it interesting when somebody tells us what Cop Block is supposed to be all about. Even the core contributors have many varying viewpoints and goals. The central theme Badges Don’t Grant Extra Rights doesn’t even mean the same thing to any two of us. So when someone from the outside thinks they know us better than we know ourselves, I find it frightfully condescending. Also, see what you just did there? You dodged a critical point by referencing unfounded claims with no evidence to back them up.

What, are you saying I can’t prove, I mean evidence, that I gave Ademo and thus Cop Block thousands of dollars over the years?

No, I know for a fact that you did. But I also know that your sites traffic and ad layouts cannot possibly be drawing in that much money. Which brings me back to a question I have had for awhile now – If your site isn’t earning it and you don’t work a standard job but manage to engage in all the vacations, gun purchases, martial arts and raise a family…where does your money come from? Genital weight lifting?

You don’t know anything about me, brother.

Well, except that you were a teenage gang banger, belong to half a dozen religions, a dozen martial arts and seem to engage in more extracurricular activities than three single men with a trust funds could hope to achieve, I guess I don’t. But I am curious, and obviously a bit suspicious. So enlighten me. Who are you and where do you get all the time and money to do all of this?

I don’t have to tell you anything.

No, you don’t, but I thought that is why we agreed to talk?

You had your chance to do that already. And all you did was retread stale, cliche accusations with nothing to back them up while throwing in some lies by another shady member of Cop Block’s past. So why don’t you just tell me, who is giving you all of this money to fund your divisive misinformation campaign? FBI, George Soros, Mossad?

Go fuck yourself, Joshua. (hangs up)

That actually went better than expected. Although I am not surprised he refuses to divulge his funding. I have my own suspicions, but I will let you draw your own conclusions. If you have some evidence of Micah’s connection to shady shit, send it to us via Cop Block Submissions with ‘Micah’ in the title.

FYI- Every month Ademo documents all incoming and outgoing funds and shares this information with those who contribute and receive funds, so Micah knows he is full of shit when he makes slanderous claims about Ademo’s activities and how that money is spent.