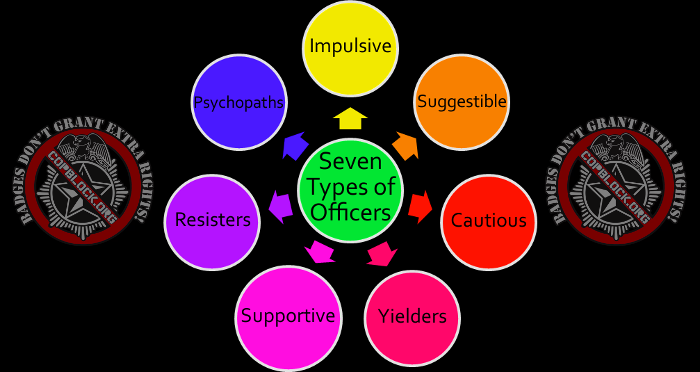 A leaked document from the FBI reveals the seven types of psychological profiles that all law enforcement officers fall into.

Psychological profiling is one of the things the FBI is most well known for. From serial killers to terrorists, their ability to map basic personality characteristic types has always been one of the greatest parts of their standard operating procedures. A testimonial from that agency recently got into the hands of activists, and it reveals what one of Americas top law enforcement agencies really think of its own professional colleagues.

1) Impulsive: These short-tempered people are the kind who are always spoiling for a fight and need only a fancied insult or slight provocation to excite them to violence or to incite others to violence.

2) Suggestible: People who get into the action early and are easily influenced to follow the lead of the more violent.

3) Cautious: Individuals who wait for the cloak of anonymity to give them the courage by yhiding their identity.

4) Yielders: Those who do not join the action until a large number of participants give the impression of universality. In other words, “Everyone is taking part, so why shouldn’t I?”

5) Supportive: People who do not actually join the mob, but who enjoy the show and even shout encouragement.

6) Resisters: Persons whose standard of judgement are not swayed by the emotional frenzy of the mob but who maintain levels heads. They can disagree with the actions of the majority.

7) Psychopaths: Individuals with a pathological personality structure are angry at the world and seek to use a riotous situation as a means of getting even with society.

I guess #6: Resisters is as close as we get to the mythical Good Cop. But while the resisters may disagree and remain more rational, they are still part of the police mob. And unless they take responsibility for holding #’s 1,2,3,4,5&7 accountable to the laws they apply to everyone else, they are just as guilty.