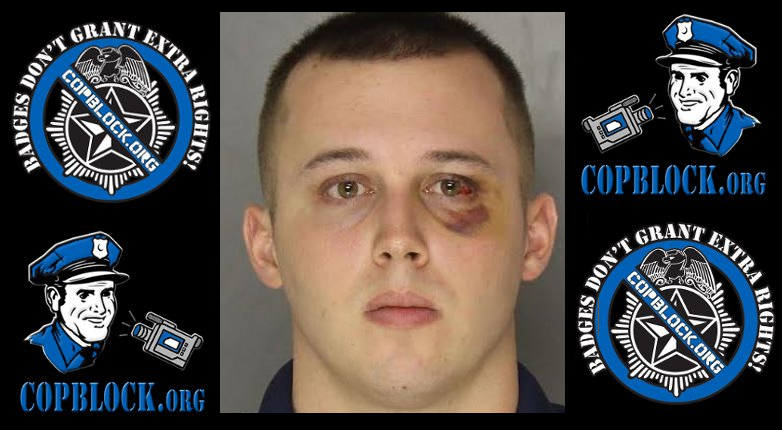 After, by his own admission, drinking at least 10 bears, having his girlfriend become involved in “several” fights during the night, and hitting a woman himself; Joshua Gonzalez started fighting again in the parking lot as he was heading to his car. Soon after Gonzalez, an off-duty police officer from the Pittsburgh suburb of Aliquippa, had shot the man he was fighting with, who was an off-duty jail guard.

As a result, Kevin Miller, the jail guard ended up in the hospital with damage to his liver and colon from a stomach wound. Meanwhile, Officer Gonzalez had to be bailed out of jail by his mom and is facing aggravated assault charges. Gonzalez, whose lawyer assures everyone he is a Good Cop, claims that he shot in self-defense after Miller reached for his waistband. (Because that’s kinda the most popular go-to thing on the “why’d you shoot that guy?” script for cops.)

So yeah, it was quite a festive Thanksgiving (via Pittsburgh.CBSlocal.com):

According to a criminal complaint, the incident began at the Milestone Bar in Brentwood and spilled into the Carrick neighborhood shortly before 3 a.m. Thursday.

Responding officers found Kevin Miller suffering from a gunshot wound to the stomach on Stewart Avenue. When they asked if he knew who shot him, he replied: “he said he was a cop…a cop.”  Miller was taken to UPMC Mercy Hospital and placed in the ICU with damage to his liver and colon. He is now in stable condition.

24-year-old Joshua Gonzalez approached officers at the crime scene and identified himself as the shooter.

Gonzalez agreed to be interviewed and told police that while at Milestone Bar he had consumed approximately 10 beers. He said his girlfriend was involved in several fights while at the bar, which had to be broken up repeatedly.

Later, while his group was walking to their car, he said someone shouted at him from a porch and the fighting began again.

He told officers that during the fight, he saw Miller “pulling up his shirt and reaching into his waistband,” which made him feel that his life was in danger. He fired one round from his personally-owned weapon at the victim, later identified as Miller. Gonzalez apologized for leaving the scene, explaining that he panicked.

When officers asked Miller whether he made any threatening movements, he said he did not and that he was “just yelling at him because he hit a girl.” He additionally mentioned that he does not own a gun.

Unfortunately for him, it doesn’t look good for Officer Gonzalez since he has only been with the Aliquippa Police Department for five months and is still on probation. In fact, they didn’t even give him a paid vacation; instead they suspended him without pay. Miller, on the other hand, has been with the Allegheny County Jail for nine years. I’m willing to bet that after his wrist heals from the harsh slap he’ll be getting on it, Gonzalez will be the one in a different area of Pennsylvania sitting in a new hire orientation for some other police department.