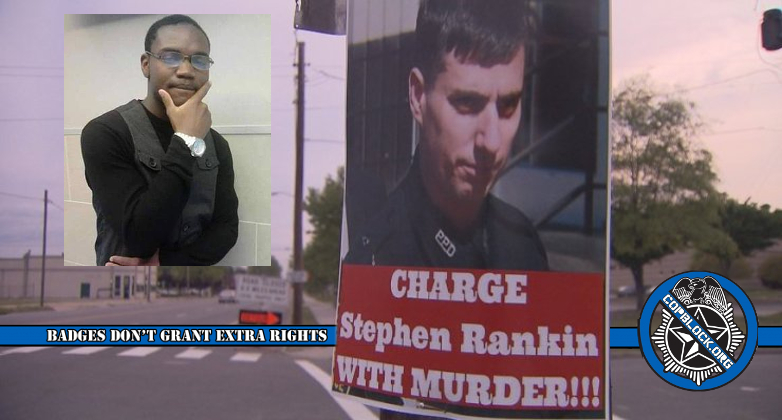 Earlier this week, a judge in Portsmouth, Virginia approved a $1 million settlement offer from the city to the family of William Chapman II. As has been reported previously at the CopBlock Network (see “related posts” below) by myself and several other CopBlock Network contributors, Chapman was murdered outside of a local Walmart by Portsmouth Police Officer Stephen Rankin.

Officer Rankin was later charged with murder in the case, but ended up only being convicted of manslaughter and receiving a sentence of just 2.5 years in prison. Although the family was preparing to do so, this settlement was actually offered without a lawsuit having been filed against the city. That’s likely due to the evidence that would have been presented during a lawsuit showing that eighteen year old Chapman, who was unarmed when shot, was actually shot from a distance. That contradicts Rankin’s claim that Chapman was a direct threat to him as a justification for the shooting.

Former Portsmouth Officer Stephen Rankin shot and killed Chapman on April 22, 2015, in the parking lot of the Wal-Mart on Frederick Boulevard.

The officer was investigating a shoplifting report when he approached Chapman, and a physical altercation ensued.

A jury convicted Rankin on Aug. 4 of voluntary manslaughter and recommended he serve 2½ years in prison. Circuit Judge Johnny Morrison imposed the full sentence last month during an emotional hearing.

He argued the city and Hargis were negligent in hiring and retaining Rankin and that Rankin wrongfully killed Chapman.

Babineau and the city reached the settlement before he filed the suit, though.

According to the petition, Portsmouth is willing to pay the Chapman estate $1 million as long as the family agrees not to pursue claims against the city, Hargis and Rankin.

Earl Lewis, a cousin of William Chapman II who serves as a spokesman for the family…lamented the case won’t go to trial.

He said an investigation spearheaded by Babineau had unearthed a lot of new information about Rankin and the Police Department. And he pointed to a BBC documentary that aired Wednesday in the United Kingdom with an interview from a former Portsmouth police lieutenant. The lieutenant said he warned his supervisors about Rankin before the Chapman shooting, but nothing happened.

“We still haven’t gotten all the facts,” Lewis said, arguing that a trial could have resulted in new revelations with the possibility of a larger monetary award. “Me, myself, I am a betting man. I would have taken it to trial.”

Lewis argued a lawsuit against Wal-Mart might still be warranted. And Babineau said he is researching what liability the retailer might face for calling police on Chapman and following him outside.

“We are not aware of any evidence indicating William Chapman stole anything,” Babineau said.

As Chapman’s cousin, Earl Lewis, points out, the settlement will also prevent further questioning of the Portsmouth Police Department. One of those questions would be why fifteen seconds of the video, which just happens to comprise the moments in which Chapman was shot, somehow disappeared from the official video sent to the lawyer representing Chapman’s family.