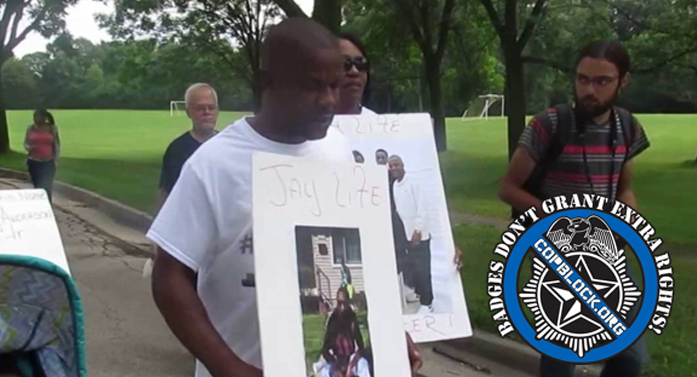 Grey skies choked Milwaukee with gloomy overcast December 5th’s morning. At its cusp, 9:45am, I was to meet Jay Anderson’s family at the District Attorney’s office. Though aware we’d view footage captured by Wawuatosa PD dash camera’s, no one was prepared for the city’s decision.

Navigating the labyrinth Milwaukee PD’s administration building, courtrooms, attorneys offices, and jail nearly made me late. Upon arriving, however, I immediately became aware of the room’s heavy vibe, tears welling in eyes, and staring disbelief. Before viewing the footage, the family was informed that a decision had essentially been made. That decision, local media now reports, was to not charge Officer Joseph Mensah.

The young officer shot Jay at around 3am on June 23, nearly five months ago. In all that time no video, extensive statement, or press conference was held by Tosa PD. As residents shifted their view’s from unconditional respect of the department, suspicions grew. Even now, rumblings from the quiet suburb echo dissatisfaction of the investigation.

Accompanying me in the DA’s office were Jay’s parents, fiance, lawyers and family friends. Three clergy women from the Tosa Together group also patiently waited. When viewing time came, however, Tosa Together was denied entry.

We stuffed the back office alongside District Attorney John Chistom, Chief Deputy DA Kent Lovern, and two Milwaukee PD investigators. I recall one being a Lt. McClain, the detective identified himself to me only as “Luke”.

We were initially showed the FBI “enhanced” footage, which is what was released. Everyone in the room, including the cops, DA Chistom and attorneys confessed it’s low quality. In fact, we moved along past the heavily pixilated clip. A point was made by one of the attorneys that nothing could be learned from the blurry clip.

The version showed to us, unlike the now public clip, was slowed down significantly–augmenting its uselessness. According to the investigators and DA, the only “enhancement’ FBI made was an enlargement. Whether this is the source of the heavy pixelation, and distortion is unknown. The Anderson’s waited on the adjustment for several months.

Next we viewed comparatively crystal clear the DOJ (Department Of Justice) enhanced footage. This clip sparked a very lively, heated back and forth between the DA, officers, and the family. DOJ’s footage allowed for more questions to be asked, rather than not being able to make anything out.

A even more telling thermal version of that same clip was also showed. It offered insight into Jay’s movements, and where brains landed after Mensah fired. A finial, equally crisp, yet longer video depicted Tosa PD backup enroute, as well as radio chatter, and arriving. Footage showing Jay getting shot–which is what was released–were void of audio. No satisfying answer was given as to why this occurred, and was subject to heated debate. Attorneys advised that no one record the conversation, and to cease if already doing so.

The video was fast forwarded several times past very evident radio chatter. This was done again once backup arrived, one officer noting Jay had “no pulse.” Family members attempted to point out how WPD stated Jay was alive for an hour after he was shot. Given the extent of his injuries, and observations made–and filmed–by officers, this seemed unlikely. A conversation with Mensah is then had, which was also cut short by fast forwarding.

I had several opportunities to pry the DA and investigators with questions. Although many weren’t given straight forward answers, a few things were gleamed. Regarding the gun Mensah claimed he saw, LT. Mclain mentioned it would’ve been “preferable’ if they didn’t touch it. WPD officers were filmed taking the gun from the car, and walking around with it. Neither investigator would say whether protocols or procedures were violated.

In fact, they stated that protocols, as well as Mensah’s background, were weren’t included in their investigation. Such details were deemed irrelevant to the 20 seconds they were focusing on. This, however, appeared to cast every other detail regarding the case to the wind. Eventually  Tosa Together were invited in, and began eagerly taking notes. After seeing footage themselves, they wholeheartedly believed the shooting wasn’t justified.

Mensah’s initial statement was also provided, and I read it. There were many things about it I found interested. What stood out right away was what Mensah say’s after already communicating with Jay, and see’s a gun. His memory get’s “hazy”, the statement read, and he couldn’t remember precise details regarding the weapon and it’s position.

These were eventually patched up, of course. Conveniently, the several minutes of interaction–around 6 or 8 paragraphs of Mensah’s report–occurred when police camera’s weren’t rolling. Meaning, none of it could be proven and investigators, by their own admitting, were taking Mensah’s word for it. There seemed to be quite a bit of “taking his word for it”.

By the end, many tears had been shed, and frustrations quelled into a kind of learned helplessness. What little press which waited outside was largely avoided by officials. Jays parents and Fianci, Star Delarosa, left under the impression that the better footage was what would be released. That evening, I went to the Anderson’s home in time for a local media press conference.

Afterward, however, news anchors and camera men expressed their own skepticism. They felt they could’ve edited FBI’s clip better, and that the whole thing seemed suspicious. More than suspicious. Reporters also stated that during a WPD press conference at the station, Chief Barry Weber wouldn’t look them in the eye.

According to them, he simply read from his paper,  hiding a smirk across his face. Yes, this can be treated as allegations. However, they are allegations from the mouths of mainstream Milwaukee media, and their cameramen. They also mentioned an order which came down from their station to not release Joseph Mensah’s name. Apparently, no explanation was given to them.

Footage I shot of this press conference, as well as other parts of that day, is coming soon. In the meantime, Jay Anderson’s family, and their growing support base, won’t give up. The sting of knowing Mensah won’t be charged seems to have only further motivated them.

Star Delarosa, after media left, seemed eager to confront WPD with Jay’s children. They, activists, and supporters encourage ANYONE and EVERYONE concerned about this case to contact Tosa PD. Send calls, write letter, but most preferably comment directly to their Facebook page. By doing so, Anderson’s family hopes to keep attention on the case as further investigation into the department itself initiates.