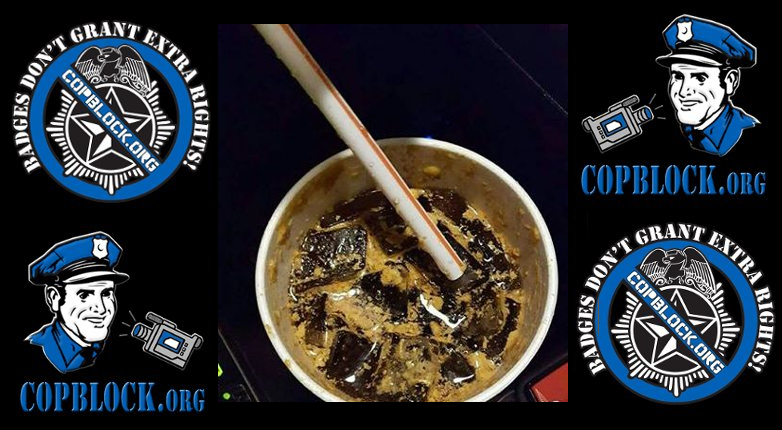 Topeka, KS – A McDonald’s employee was charged with two counts of battery on an officer after purposely spiking their drinks with mustard.

Jonathon Gil the employee fired for the prank is now facing serious legal ramifications as a result of his actions, but one might consider the charges more of an act of vengeance than justified recourse.

If Jonathan had spiked your drink with mustard he would have been fired, but you would have limited recourse when it comes to legal options. The establishment would more than likely comp your meal and maybe even offer you complimentary meals, if you choose to frequent their establishment, but if you tried to have their former employee arrested for battery; chances are you would be laughed at.

Unfortunately for Jonathon, the people he chose to prank were cops and there isn’t much they are willing to let slide. In fact, the officer took a photo of his drink and posted it to the Kansas GOING Blue Facebook page in an attempt to drum up as much outrage as possible. They then followed up by pressing battery charges on the employee in an attempt to permanently damage his reputation for having the audacity to interrupt their day with his mischief.

(1) Knowingly or recklessly causing bodily harm to another person; or

(2) knowingly causing physical contact with another person when done in a rude, insulting or angry manner

Mustard in one’s  soda doesn’t even come close to that definition and it would appear these officers are stretching the law in an effort to retaliate against individuals who disrespect them. Proving once again there is no action so small the boys in blue will not try to have you imprisoned for it and revealing the vengeance culture that the state and its actors thrive off of.

While Jonathon may have been out of line when it came to his actions, that does not mean there isn’t a legitimate gripe against law enforcement when it comes to the marketplace. Unlike many other services, everyone is forced to pay for police, whether they agree or not. The employees of these establishments also create brand new wealth through their voluntary interactions with their customers.

On the flip-side of that coin the police are not forced to eat at McDonald’s and have the freedom to dine wherever their heart desires. Their are no mandates in place that dictate where the police have to eat. Plus, the police are payed through taxes taken from hard workers such as Jonathon Gil and their services provide no new wealth to the economy as such are parasites operating within a legal monopoly formed in order to maintain a stranglehold on the service of protection and the initiation of force.