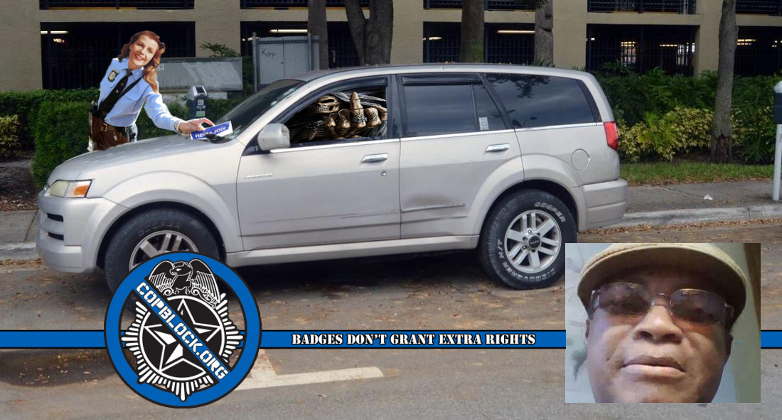 For four days, Jacob Morpeau’s dead body sat inside an SUV on a Fort Lauderdale street and during that time parking enforcement officers continuously added parking tickets to the windshield of his car. Two of the tickets were written within three minutes of each other and one of the “meter maids” cited the car for two expired meters, because the vehicle’s front end was extended slightly into the space in front of it.

The Revenue Generation fest may have continued indefinitely if a woman, who happened to walk past, hadn’t become curious about the stack of tickets attached to the SUV. That curiosity led Carolyn White to actually look inside the car, something that apparently had never occurred to any of the parking enforcement officers in all that time. That’s when she saw Morpeau slumped over in the driver’s seat.

The Isuzu was parked on the north side of Southeast Sixth Street, west of Federal Highway near the Savor Cinema, according to copies of the tickets the city provided.

Two of the tickets were written within three minutes, and just six hours before White saw Morpeau’s body inside the SUV. The same parking officer cited the Isuzu for two expired meters, perhaps because the SUV’s front end was in part of the next parking space.

White said about seeing the tickets and looking into the car, “I was being nosy. I never let the meter man catch me. I never got a parking ticket and I wanted to know why somebody else got caught. And that’s what made me look inside.” She said she saw a walker in the back seat of the Isuzu and was curious about why someone who needed it would leave it behind. And, she said, she wonders why a parking officer didn’t see what she saw.

“I can understand why the meter person probably didn’t see him from the driver’s side,” said White, who had been parked nearby, waiting for a friend who had business at the courthouse.

“He was underneath the steering wheel, his head was in the middle of the seat, between the two seats,” White said. “But you could see him on the passenger’s side. That’s how I seen him, from the sidewalk.”

After White’s discovery, she said her screams in the middle of Sixth Street drew Kevin McGoey, owner of Kevin’s Bail Bonds, from his business’ green cottage that is across Sixth Street from where the Isuzu was parked. His staff called 911, he said.

“It was sad,” McGoey said. “The guy was probably sitting there all weekend.”

The City of Fort Lauderdale was considerate enough to dismiss the parking tickets after Mr. Morpeau’s inability to properly feed the meters was established.