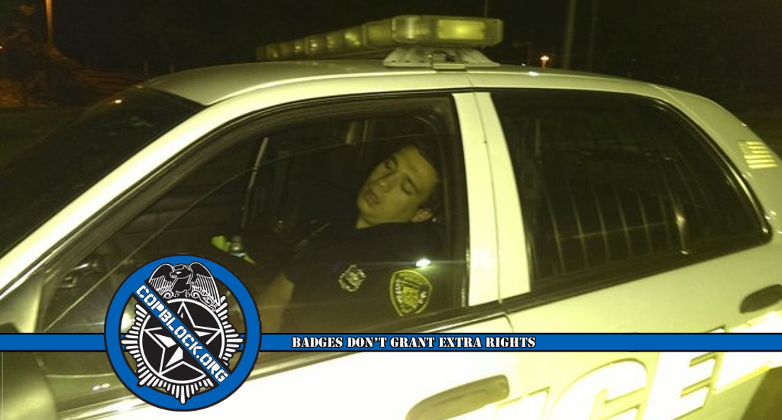 Officer Jesse J. McKeough of the Belleville Police Department became a bit of a Youtube star when he was caught sleeping like a giant steroid infused baby inside his patrol car back in 2013. After photos of his nap break were posted publicly (see video embedded below) by Anthony Telinski and everyone on the planet laughed for hours on end, McKeough was suspended for an undisclosed period of time as a result. Of course, this was no laughing matter to McKeough’s co-workers and the Good Cops at the BPD immediately took action by harassing and retaliating against Telinski.

Three years later, Officer McKeough is back in the news, but for much worse than taking a beauty sleep while wrapped in his Magic Suit. McKeough was arrested along with three other off-duty Belleville police officers after they were involved in a bar fight that started inside the Pourhouse 17 Pub on Ridge Road in North Arlington and spilled out into the parking lot on Oct. 21st. What or who exactly started the fight has yet to be disclosed. The person assaulted by McKeough was hospitalized as a result of injuries sustained in the brawl.

A 26-year-old man allegedly beaten up by an off-duty police officer at a crowded bar two months ago has described a chaotic scene during which he suffered blunt force trauma to his head and internal bleeding.

“Someone got pushed into me. When I went down to the floor I got repeatedly hit – it was mainly shots to the head,” said John Koski, 26, of Lyndhurst.

Koski said he was taken by North Arlington Volunteer Emergency Squad to a local hospital where he was treated for more than three hours.

According to a court summons, Jesse J. McKeough, 28, struck Koski repeatedly with his fist. McKeough, a patrol officer with the Belleville Police Department, is charged with simple assault. McKeough, a police officer for four years, has been suspended without pay.

Three other Belleville police officers are also suspended without pay in connection with the incident: John Clarizio, 32, Marco Zarfino, 24, and Giovanni Casillo, 39.

The four officers were arrested Monday in connection with the fight, which occurred Oct. 21 at Pourhouse 17 on Ridge Road.

Clarizio is charged with simple assault for punching a bar patron with a closed fist, according to a court summons. The officer is also charged with hindering apprehension for falsely telling a Lyndhurst police officer his name was “Anthony Michael Fasano,” the summons states.

Zarfino is charged with simple assault. A court summons states he punched a person in the bar.

Casillo is charged with simple assault for allegedly punching bar patron Vasilios Theofanidis, 39, according to a summons.

Theofanidis, described by authorities as a pool technician, is charged with simple assault for allegedly pushing a person in the bar, a summons states.

John Koski, the man who ended up at the hospital as a result of Officer McKeough’s attack, said that he didn’t even know what started the fight and was attacked unprovoked while sitting at the bar. So, the lesson learned here should probably be that once a bar fight starts you should either join in or hide behind the bar like in all the cowboy movies. Just sitting innocently at the bar leads to a hospital trip.

And cops are much less dangerous when they are passed out in their patrol cars with drool leaking out of their mouths.