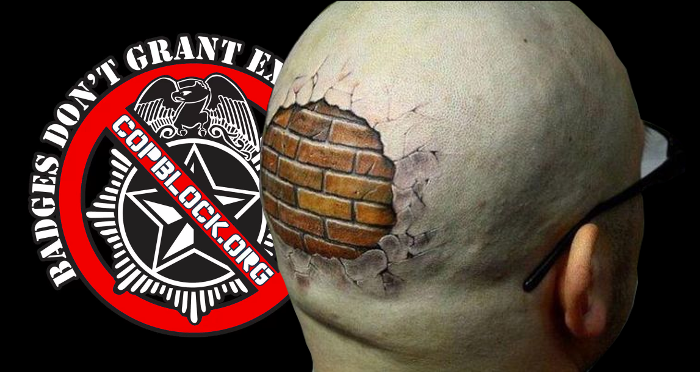 Every day we receive feedback from our audience containing the mythical “A” word – accountability. Straight up, I got nothing to do with that nonsense, and here is why…

Although I have written numerous articles outlining why holding police accountable is not my goal, much of our audience doesn’t seem to get it. They continue along with the same old scripted performances about accountability while making accusations and trying to tell me what I am supposed to be doing.

Despite whatever Cop Block once was, or what other Cop Blockers say or what you believe – I am not accountable to your entitlements or expectations for the following five reasons.

First of all, you aren’t the boss of me. Unless you and I enter into a contract whereupon I agree to write specific articles for a specified amount of pay, you have exactly zero business telling me what I should be writing about or how. And I will not advocate for accountability for any amount of money.

Secondly, you are not in charge of defining what Cop Block or myself are all about. What we do and how we do it is completely up to each of us as individuals. We get to decide our own goals and methods of trying to attain them. If even we do not agree on a single outcome but can work together, there is no reason why spectators get to define us.

Third…accountability is futile. If you were enslaved would you be okay with that so long as your master followed the same rules he beats you for? Because you are enslaved. Through endless restriction, regulation, taxation, fines – the whole damn system – you are bought and owned. You are little peons helping transfer the planet’s power and wealth up into a small percent of deluded, psychopathic humans who make up the ruling class. And there is no escape.

Where you gonna go? Another country where you will be enslaved by the same sort of people?

Out into the wilderness where you will still be taxed and forced to participate in the legal tap-dancing of government? Where you will be forced to plug into electrical grids and told you can’t even keep your own rainwater or produce natural products for trade?

There is no way out. You are owned. And the only thing that could possibly be sadder than that is for you to support your masters willingly. To bare wrists for your own shackles with a smile and to bend for the whip with a whistled melody. That you think holding the masters accountable to the terms of their own depravity makes it all fair is both sad and sadistic. Which leads me to the next reason why I have no interest in the accountability game.

Accountability is just vengeance parading as justice that does nothing to address the underlying issues. My goal isn’t to get more police locked into their inhumane jails and prisons. I am not trying to get back at law enforcement officers. In some ways they are also victims of the same stupid, brutish ideologies of the ruling elite whose propaganda we are all stewed in from birth. Just as many of you cannot see how fundamentally wrong they are, neither can they. And I am trying to free you both even while you spew your hateful invective and judgments at me and my peers.

The fifth and final reason why I am not, and will never be concerned with accountability, is because I do not consent to their laws, their authority or their existence.

Their endless litany of legal traps is ridden with victimless crimes and other restrictions and regulations meant to enforce the agendas of the ruling class and spiral more power and wealth into it. I wholeheartedly reject the entire legal system, which means I am not advocating holding anyone responsible to it.

Their authority is derived from a monopoly on violence. Everything police and the state do relies on the fact that, if you do not obey, they will extort, steal, kidnap, imprison, torture, brutalize and/or kill you. If they didn’t have that to hold over us, nobody would obey. You can fantasize about the whole thing being voluntary all you want, but nobody has ever been given a chance to demonstrate that. The state, its laws and enforcers have never made it optional. You cannot tell me the system would work without force because it never has. Ever.

Their existence is based on their laws, their authority and the violence which makes it mandatory. So I do not consent to police nor the state – nor the ruling class that use both to create monopolies and the divisions that they require to exist.

And I just don’t know how to make that any clearer to all of you trying to tell me my business.

Here is some further reading, anyway.

Accountability Is Futile: How and Why to Abolish Police and the State

“CopBlock” DOES NOT Seek Accountability

The Specific & Inarguable Reasons Why Accountability Can Never Work

Sorry, I Cannot Help You & Neither Can Anyone Else – Abolish the Police

If You Want True Reform, Abolish The Police!

Don’t Call the Pigs: An Informal Guide to Alternative Policing Within an Anarchist Justice System

The High Cost of Vengeance Culture & Its Alternatives