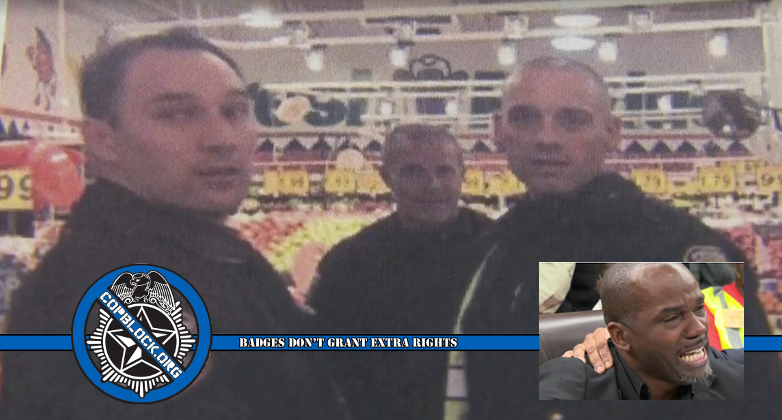 Ronald Lanier, a retired New York corrections officer, cried heavily during a press conference as he described how he discovered the hard way that All Lives Don’t Matter to police. In fact, All Blue Lives aren’t even guaranteed to matter when his Brothers in Blue are in search of someone matching the description of “some black guy.” (Obviously, in such situations jumping on the first black person you come across is the most efficient option available to Police Heroes.)

According to Lanier, he was shopping at a local grocery store when two police officers assaulted him from behind, then beat and arrested him without any sort of provocation. They even ignored his frantic attempts to alert them that he had worn one of their Magic Suits for 22 years. Instead of extending the typical get out of jail free secret handshake, as police are customarily  trained to do in the police academy, Lanier found himself being laughed at and horribly disrespected as if he was “just another black dude.”

Ronald Lanier, 53, was shopping in a Mineola supermarket on Nov. 30 when he alleges the officers grabbed him from behind without warning, Newsday reported. The Garden City police officers, whose district borders Mineola, were searching for a fleeing shoplifter, according to CBS 2 News.

At an emotional press conference last week, Lanier said he cooperated with the officers and identified himself as law enforcement. But he said they laughed and manhandled him as they placed him in handcuffs.

“I’ve never been cursed, physically abused, beaten and treated like a slave as I was two days ago,” Lanier said in tears.

“They didn’t have a good description of who they were looking for. That doesn’t give you the right to go into a store and grab the first black person you see and throw them to the ground,” Brewington told 1010 WINS. “The fact that he happened to be a black male in the store does not make him a culprit. It does not make him a suspect.”

Lanier said he spent about 20 minutes inside a squad car before the officers let him go, without an apology or explanation. Another suspect had reportedly being taken into custody for the crime.

You can’t help but feel bad for Lanier. It’s gotta be difficult to suddenly be awakened to the fact that your “Brothers” still consider you “just another black dude” after you spent over two decades deluding yourself into thinking blue is the only color that matters and that you are “one of them.” Being beaten, disrespected, and falsely arrested as if you’re some mere mortal and not a Fearless Hero is a wake up call no-one in his position ever wants to receive.

(And, once again, the words used are telling. In the video, Lanier doesn’t complain about police mistreating black dudes. He complains that they mistreated HIM as if he was “just another black dude.” I’m sure in the 22 years he spent as a corrections officer he never saw them mistreat any black dudes, so this was a total surprise to him. Or maybe the tears are just because he never thought he would be that black dude.)