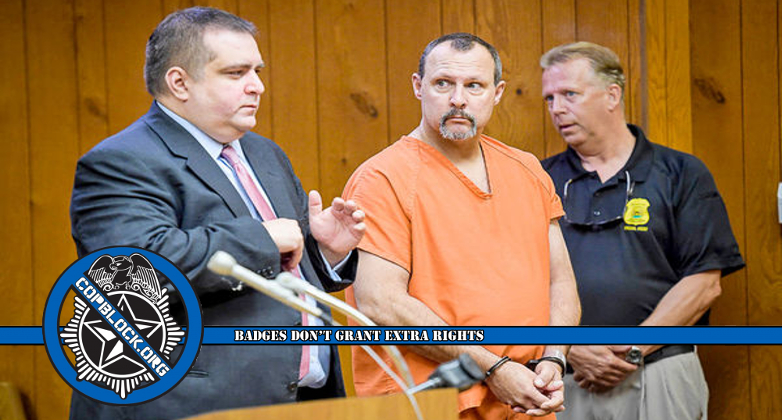 The following post was shared with the CopBlock Network by a reader using the pseudonym “The Poor & Unknown,” via the CopBlock.org Submissions Page.

The CRIMINAL’s are at it again (Via DetroitNews.com): As a part of his plea, Parsons is required to register as a sex offender for 15 years and cannot work as a law enforcement officer in Michigan, according to the Attorney General’s Office.

Parsons, 48, resigned from the Farmington Hills Police Department on June 15. (Just how do they let people like this resign with full pension and insurance etc? This is criminal!!)

He was arraigned in May at 51st District Court in Waterford Township on multiple charges stemming from the investigation, which began after a tip from the Michigan Attorney General Bill Schuette’s office learned someone, identified as Parsons, had been downloading child sexually abusive material. A probe revealed Parsons had downloaded at least 10 videos with the explicit imagery and “surreptitiously filmed an adult in the nude,” state officials said.

Matthew Charles Parsons, 48, of Waterford pleaded guilty to multiple charges related to downloading child pornography in July. He resigned from the police department and will be placed on the sex offender registry for 15 years.

He is facing up to 7 years in prison.

Farmington Hills Police Chief Chuck Nebus says investigators from the Michigan Attorney General’s office and Internet Crimes Against Children Task Force showed up to the station on May 25 with search warrants.

The focus of the search was Officer Parsons, a 20-year veteran of the department.

“It was shocking that it was one of our own,” says Chief Nebus.