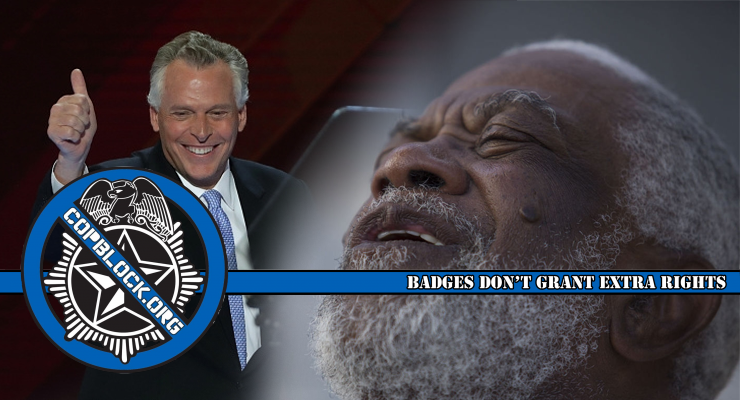 President-elect Trump recently alleged massive voter fraud in a number of states, including Virginia, where democratic Governor Terry McAuliffe restored voting rights for more than 67,000 former felons ahead of the November election. While many republicans criticized the move as a blatant attempt to secure votes for his long-time pal, Hillary Clinton, many others praised McAuliffe as a hero for civil rights who was trying to address an historic wrong that specifically targeted African Americans for felony disenfranchisement.

Restoring rights to those who have served their time is the right thing to do, however, the media focused on emotional stories of tearful ex-felons setting foot inside of the ballot box for the first time rather than examine what little practical impact the ability to vote would have in improving their lives. Supporting prisoner re-entry, removing barriers to employment such as occupational licensing requirements, and sending fewer people to jail for victimless crimes in the first place would have a far greater positive effect for improving the lot of ex-offenders.

Additionally, the right to vote in Virginia has even less value once you consider that residents do not even have access to the sort of ballot initiatives that residents in Colorado and elsewhere used to legalize marijuana.

Trump was correct about the existence of voter fraud in Virginia, but not the kind he claimed. The fraud that happened here is that so many voters have been duped into thinking that Terry McAuliffe is some sort of champion for civil rights or criminal justice reform.

The governor did do a few things, like signing an executive order to “ban the box” on applications for state government jobs to remove questions relating to convictions and criminal history, “ Inform all hiring authorities within the executive branch that state employment decisions will not be based on the criminal history of an individual unless demonstrably job-related and consistent with business necessity, or state or federal law prohibits hiring an individual with certain convictions for a particular position,” in April of 2015.

McAuliffe also created a commission to study re-introducing parole, which had been abolished in Virginia 20 years earlier. The commission ultimately did not endorse resurrecting parole, even though a study by the Pew Charitable Trust found that parole reduced recidivism rates and incarceration costs in New Jersey, and even some of the people who were instrumental in ending parole in the state have changed their tune since then:

“Virginia Beach Sheriff Ken Stolle, who also helped end parole when he was in the state legislature, has said Virginia should reconsider its mandatory minimum sentences. Stolle has said he didn’t believe the legislative intent was to have both mandatory minimums and a no-parole system.”

A Selective Focus on Rights

When the Supreme Court of Virginia ruled that McAuliffe’s executive order restoring voting rights to more than 200,000 non-violent felony offenders was unconstitutional, he valiantly promised to sign restoration orders one at a time. He also released an official statement, which informed Virginians, “I remain committed to moving past our Commonwealth’s history of injustice to embrace an honest process for restoring the rights of our citizens, and I believe history and the vast majority of Virginians are on our side.”

However, his candid remarks while in Philadelphia for the Democratic National Committee revealed his disregard for another right that many in Virginians view as fundamental: “All I’m doing is giving you the right to vote back. That’s it. I’m not giving you gun rights back. I’m not reducing your sentence.”

Since McAuliffe’s actions were specifically to restore the voting rights of nonviolent offenders who had completed all requirements of their sentences, why shouldn’t they also have their right to keep and bear arms restored? Self-defense is one of our most basic right as humans. An appellate court in Florida recently recognized that “gun-toting felons have the same rights as law-abiding citizens to use the Stand Your Ground law to avoid criminal charges.”

Governor McAuliffe has voiced support for medical marijuana, but said he’s “not there yet” when it comes to total legalization. Luckily for him, he didn’t become one of the 22,000 Virginians arrested for marijuana annually, when he casually posed for a photograph with Willie Nelson and Nelson’s can of weed this past September.  Even though there has been a 14% drop in such arrests over the past few years, they still account for 60% of total drug arrests in the state.  Virginia also imposes a 6-month drivers’ license suspension for pot offenses, because why wouldn’t you interfere with someone’s ability to drive to work and  lawfully support himself and his family for using a substance that is legal and adding tremendously to state coffers (or about to) in eight states.

McAuliffe could not end pot prohibition through an executive order, but he could wield his influence to move the state in that direction. Instead he’s just another democrat whose mostly-imagined commitment to criminal justice reform falls flat in this major category.

McAuliffe has also been conspicuously absent on the topic of police brutality in the state, especially regarding the John Geer case, which he never mentioned despite having a residence in Fairfax County. In the aftermath of the Martese Johnson incident, in which a University of Virginia student was brutalized and terrorized by overzealous alcohol enforcement agents, McAuliffe said he had “zero tolerance” for such incidents.

He apparently learned tolerance during the intervening months of the Virginia State Police investigation into the incident. Despite the fact that the Department of Alcoholic Beverage Control (ABC) had previously vividly demonstrated that their commitment to saving college students from the perils of underage drinking includes a willingness to put their lives in peril from unwarranted police violence, McAuliffe agreed with the report that cleared the ABC agents of wrongdoing and supported their return to work. In addition, he flatly lied about not being able release the report to the public under state law, only relenting after getting repeatedly called out by journalists, open government advocates, and other elected officials. But McAuliffe did issue an executive order mandating re-training for ABC agents!

Maybe they’ll finally be so well-trained that they finally kill someone next time.

Governor McAuliffe again demonstrated a willingness to turn a blind eye to injustice in the aftermath of Jamycheal Mitchell’s deplorable and mysterious death at the Hampton Roads Regional Jail in 2015. The mentally ill inmate had been allowed to deteriorate and waste away in a jail cell over the course of 4 months following his arrest for stealing about $5 worth of junk food.  Author and advocate for the mentally ill, Pete Earley, provides a rundown of the rampant malfeasance in the case:

Mental health advocates, the NAACP and the ACLU have called on the Justice Department to investigate because of the state’s failure to explain Mitchell’s death. Several state agencies that should have investigated either demurred or claimed they lacked jurisdiction to interrogate jail officials.

That left jail officials to investigate themselves. They did and, less than 10 days after Mitchell’s body was discovered, announced they had done nothing wrong. They refused to make that self-serving report public.

Their credibility took a hit after reporters learned that a video camera outside Mitchell’s cell could show whether guards regularly fed him and nurses entered his cell. Jail officials said they had taped over that footage because it didn’t show any “criminality or negligence.” But when Mitchell’s family filed a $60 million wrongful death suit that required the jail to hand over records to the court, jailers said they located the missing footage.  Even so, they have refused to make it public.

Democratic Virginia Gov. Terry McAuliffe’s administration has come under fire, too. One reason Mitchell languished in jail is because a state hospital worker tossed his transfer paperwork into a drawer, where it wasn’t found until five days after he died.

State officials delayed releasing one embarrassing report about Mitchell for four months until the Virginia legislature ended its session. Last month, three whistle-blowers filed an 18–page complaint about the Office of the State Inspector General’s handing of its Mitchell probe. Among their charges: OSIG investigators didn’t visit the jail immediately after Mitchell’s death but did a “desk review,” simply phoning officials for assurances nothing inappropriate had happened. Sadly, the governor’s office dismissed that eye-popping complaint without bothering to interview the whistle-blowers. Local news reporters then revealed that OSIG Director June Jennings failed to disclose in her report that her husband works as a manager at the state hospital the OSIG was investigating, and that the lead OSIG investigator used to be employed there, raising questions about the investigation’s impartiality.

In September, an investigation by the Richmond Times-Dispatch found that “Inmates died nearly nine times more often in custody at Hampton Roads Regional Jail than at other local or regional jails in Virginia during the past three years, according to an analysis of statistics from two state agencies.” September is also when Virginia Attorney General Mark Herring and Governor McAuliffe “joined advocates’ calls for a federal civil rights investigation into Hampton Roads Regional Jail after a second suspicious death renewed scrutiny of inmates’ access to medical care.” Why not call in the feds after having thoroughly demonstrated that they were either unwilling or unable to have the facility properly investigated?

121
SHARES
FacebookTwitterGoogleRedditTumblr
DiggLinkedinStumbleuponMailPrint
You Can Support Cop Block by shoppping on Amazon using the banner below:
BANNERS ARE CLICKABLE