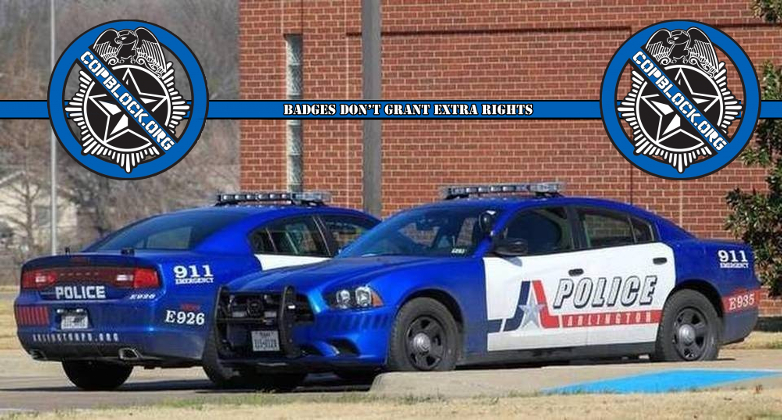 Back in May, fifteen police officers from Arlington Texas were given paid vacations after it was discovered they had been falsifying traffic stops in order to meet department ticket quotas. Now nine of those officers have been fired and another three have quit as a result of an internal affairs investigation. The remaining three and another who was later added remain on paid suspension while the investigation continues.

The traffic stop irregularities came to light when department supervisors attempted to review dash cam footage from the phantom stops. Once it was discovered that no dash camera video existed, a wider internal probe was initiated. Another “red flag” that raised suspicion was that the same license plate number was used for multiple stops.

In the end, it was determined that no stops had been made, nor had any citizens been contacted by the officers during the reported stops. The results of the internal investigation have been forwarded to the Tarrant County District Attorney’s Office for a determination of whether they will receive a painful slap on the wrist or some sort of imaginary punishment for their imaginary actions.

They are accused of lying about traffic stop reports, tampering with governmental records, and conduct unbecoming a police officer, the press release said.

Their cases have been forwarded to the Tarrant County District Attorney’s Office, which will determine if criminal charges will be filed.

Two of the fired officers are also accused of not being truthful in their testimony with internal affairs investigators.

“These allegations are serious and represent conduct that is not consistent with departmental expectations,” Johnson said in a statement at the time.

Mayor Jeff Williams and several City Council members did not return requests late Friday for comment on the case.

The accused officers reported on their in-car computers that they had made a traffic stop at a particular address but did not give any names, a source close to the investigation had said.

The allegedly falsified stops were discovered when supervisors could not find accompanying dash cam video of the stops.

Officers are required to report driver demographics, the reason for the traffic stop, whether an arrest occurred and whether a search was conducted during the stop, said Cook, the police spokesman. That data is used to compile the department’s annual racial-profiling report.

While also maintaining that the investigation was “flawed,” the attorney for two of the officers, Randy Moore, also claims that the Arlington Police Department has a quota system that officers are required to maintain. According to Moore, this quota system is responsible for the falsified traffic stops that he claims didn’t actually happen.
In spite of the department’s denials of the quotas’ existence, one of the stated motivations for the scheme was the desire to do well on performance evaluations. Of course, it’s not at all unusual for police department nationwide to institute quotas under some other name and pretend that they aren’t actually quotas and/or to have unannounced quotas that are enforced by supervisors.
In addition, there was also a recent case not far from Arlington in which four Houston police officers concocted a scheme involving traffic tickets to fraudulently get paid overtime for testifying in court by naming each other as witnesses in traffic tickets they wrote. So, it’s not at all unheard of for Road Pirates to realize that some of that revenue they are generating could belong to them personally if they played their (marked) cards right.
1.7k
SHARES
FacebookTwitterGoogleRedditTumblr
DiggLinkedinStumbleuponMailPrint