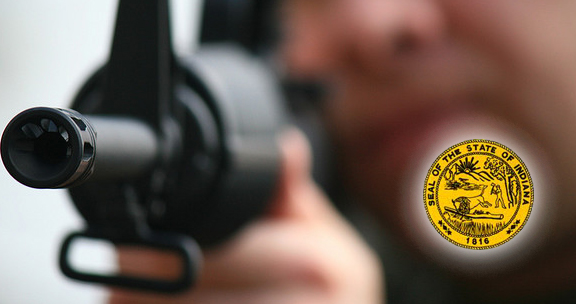 Hold onto your holsters, folks: shooting a cop dead is now legal in the state of Indiana.

Governor Mitch Daniels, a Republican, has authorized changes to a 2006 legislation that legalizes the use of deadly force on a public servant — including an officer of the law — in cases of “unlawful intrusion.” Proponents of both the Second and Fourth Amendments — those that allow for the ownership of firearms and the security against unlawful searches, respectively — are celebrating the update by saying it ensures that residents are protected from authorities that abuse the powers of the badge.

Others, however, fear that the alleged threat of a police state emergence will be replaced by an all-out warzone in Indiana.

Under the latest changes of the so-called Castle Doctrine, state lawmakers agree “people have a right to defend themselves and third parties from physical harm and crime.” Rather than excluding officers of the law, however, any public servant is now subject to be met with deadly force if they unlawfully enter private property without clear justification.

“In enacting this section, the general assembly finds and declares that it is the policy of this state to recognize the unique character of a citizen’s home and to ensure that a citizen feels secure in his or her own home against unlawful intrusion by another individual or a public servant,” reads the legislation.

But does this piece of man-made legislation really change anything for people living within the arbitrary political boundaries of Indiana?

Or for that matter – do people living outside those arbitrary political boundaries of Indiana have any less of a right to defend themselves?

Consider Larken Rose’s perspective from his post, When Should You Shoot a Cop:

The fact that Mitch Daniels – who claims the right to regulate the lives of millions of others, signed a piece of paper that others had drafted – is likely to get so much attention only underscores the existing gulf between the fact of self-ownership and the perceived reality of arbitrary external authority.

Did Daniels’ actions bestow upon those living within the arbitrary political boundaries of Indiana any rights they didn’t have before? Not at all. Rights are inherent to each individual. Another person or group of people, no matter their title, cannot grant additional rights.

Despite the press this piece of man-made legislation has attracted and the vocal push-back likely from police associations, it’s only a distraction. If individual rights hinge on the place of occupation of another, fragmentation and double-standards is only solidified, and rights become something that can be usurped with the stroke of a pen.

The sooner we each look past these artificially-created mutually-exclusive roles, the more clear it is to see that no one has extra rights and thus these related conversations are moot.

Do you actually believe a stranger whom you’ve never met, whether in Indianapolis or Washington, DC has the right to dictate every aspect of your life? That a piece of paper can fundamentally change your ability to defend yourself? If so, does that not make you a slave?

You were born free. Live free.