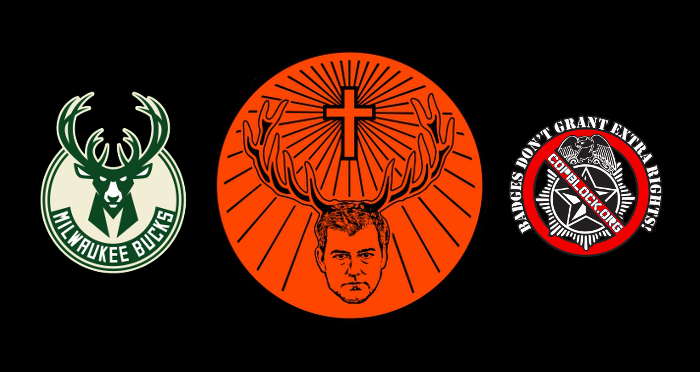 Professional basketball team, the Milwaukee Bucks, have filed a lawsuit against Cop Block for trademark infringement.

This mornings mail included a cease and desist order demanding that we remove our Slagermeister logo from our website and social media, as well as filing papers for a lawsuit against us for having infringed upon the Milwaukee Bucks logo.

Almost a year ago we were threatened with a similar lawsuit by Jagermeister, the cough syrup that promotes bad choices. That lawsuit, however, never came to fruition as our usage was protected under parody provisions.

The Bucks suit comes right after the announcement that they themselves are being sued by Jagermeister for allegedly infringing upon their trademark design. The Bucks have filed a counter suit against Jagermeister.

As we await word that Jagermeister will attempt another lawsuit against us, we have filed preliminary paperwork in lawsuits against both Jagermeister and the Bucks, resulting in the first three-way lawsuit in American history. Litage à trois!

Since these lawsuits call the ownership of antler-related images into question, all parties will have to discontinue use until the courts can sort it out. Members of the deer family have also been served with cease and desist orders and will face heavy penalties for displaying antlers until a ruling is made.

Meanwhile Michael Slager will probably get off scot-free or with considerably lesser charges because our entire justice system is merely a device to protect the ruling class and their mercenaries against the laws they benefit from enforcing against the rest of us.

Just remember, it is a free country, just as long as you have more wealth and power than almost everyone else.

Note for dumbasses: No, this is not fake news. This is satire. It is a way that smart people have been using for centuries to point out the foibles of their culture and lampoon the zeitgeist of the times. If this confuses you or makes you angry please cauterize your genitals immediately to avoid genetic contamination of the future.