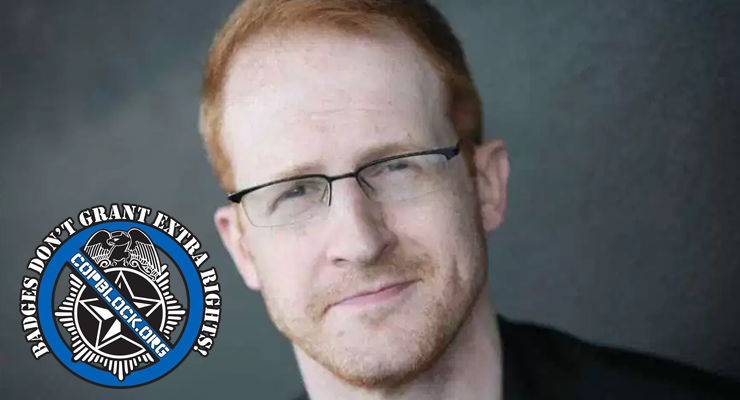 Steve Hofstetter was doing a show at the Mohegan Sun and one of his jokes was about bad cops. However on this night a young officer was present in the audience. He was also extremely rude and talked throughout the show and after hearing the joke – which I will not ruin, so make sure to watch the video – told Hofstetter to stop disrespecting him and proceeded to leave the establishment.

His actions were probably the best thing for the comic performing and the audience in attendance. Anyone who has a been to a comedy shows knows that there is nothing worse than some A-hole talking throughout the performance and ruining all of the punch lines.

However instead of just peacefully leaving the comedy room and going elsewhere, the off duty cop proceeded to shoot his mouth off, steal a drink off someones table before trying to start a fight. The bouncers started to escort him out but he broke free of their grasp and charged back into the comedy room and started mouthing off to someone else present in the audience.

Steve isn’t entirely anti cop and he still believes there are good police officers working in the system but it bothers him that they usually “keep quiet”. I disagree. If you remain silent in order to tow the thin blue line and cover up for your co-workers crimes, you are no longer to don the mantle of “good cop”. Hopefully Hofstetter will come to the same conclusion in the near future and start putting out some Carlin style anti establishment comedy.

Interestingly enough there was a retired police officer in the audience and he also left the show after the joke but not for reasons one would assume. It turned out that he was a 40 year veteran and the behavior of this young officer was so appalling he had to leave the room in order to calm down.

The police in the US have a serious issue with their perception of respect. Someone can’t even “Do their job” without the police getting butt-hurt that they made fun of their profession. In fact the feels were so real the officer felt he needed to disrespect the entire room with his outburst, steal a patrons drink and assault other members of the audience.

Who was really the disrespectful individual in this video, the comedian or the cop?