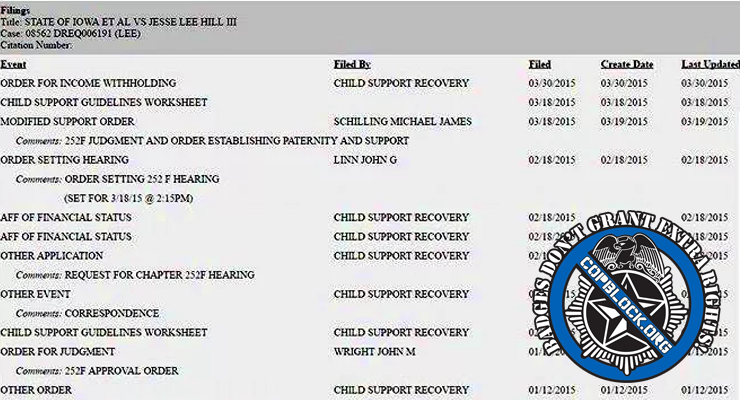 Jesse Hill’s lack of remorse for recklessly taking the life of the mother of two young children begins to make sense when you understand that the man doesn’t even care much about his own kids.

In January 2015 Officer Jesse Hill of the Burlington Police Department shot and killed Autumn Steele during an icy fall that happened while he was trying to shoot her dog Sammy. But since there has been no evidence that anyone but Hill escalated the situation in which a woman was killed, her death was not so much an accident, but an act of neglect with malice.

Here in Burlington rumors began to spread of other parts of Hill’s questionable past that call his character into question. Besides showing no remorse for the death he caused, a video surfaced of Hill (before becoming a cop) flashing gang signs. One of the other persistent rumors is that Hill had fathered a child during an affair.

In investigating that rumor through searching public records I found that Hill had indeed fathered a child with a woman and tried to skirt his responsibility until he was forced to by the state. Not only that, but since at least one of the children from his marriage is his oldest, it means that the unsupported child was the product of cheating. People around here claim that the cheating didn’t end there either, but who is to say? Certainly the guys character is not inviting of the benefit of the doubt. The Child Support Recovery Unit are the agency that goes after the people who have not paid their child support. As it turns out, the rumors were all correct. Jesse Hill is a deadbeat dad and a cheater.

At the same time the Burlington Police Department and local media take lots of opportunities to paint Hill as a hero and upstanding officer and all around great guy. Recently he was seated next to a child during a charity police support function and had his picture taken so the people of Burlington would believe he is a friend and protector of children. I cannot imagine what Autumn’s family must feel when they see these horrible things. I am ashamed to live in Burlington due to the fact that so many people won’t speak out about this and demand justice. It is beyond me how Hill can live so peacefully with what he has done, but I cannot understand at all why he has not been tried for his crime and instead used as some sort of mascot for the police and our city.

Photography Is Not A Crime recently reported that the Steele family have filed a lawsuit against Hill. The ability to do so would expire in January, so the civil case is likely a last resort in light of any possible criminal case being delayed by the Iowa Board of Public Information’s inability to make a decision regarding the release of evidence to the family, outside investigators and the public.

If Steele’s family read this, or someday her children do, I hope you know that there were some of us here that want justice for what happened to Autumn and will never forget her or what was done. And when Jesse is called to answer for the deeds of this lifetime in the hereafter, unless he accounts for what he has done and makes amends now, his judgment will not be kind.

821
SHARES
FacebookTwitterGoogleRedditTumblr
DiggLinkedinStumbleuponMailPrint
You Can Support Cop Block by shoppping on Amazon using the banner below:
BANNERS ARE CLICKABLE