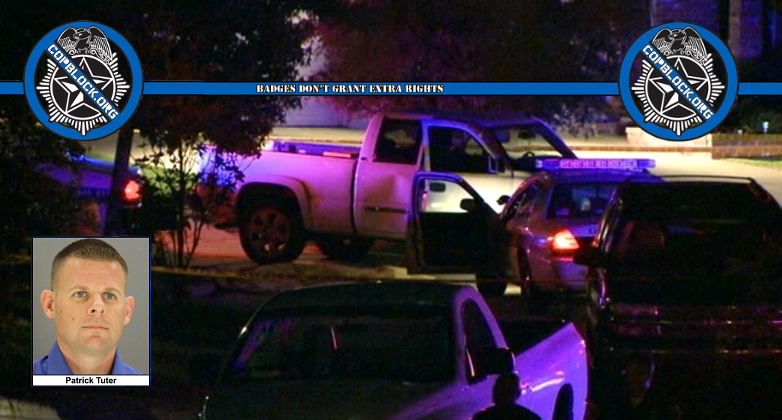 Officer Patrick Tuter began trial on Tuesday for fatally shooting a man during a high-speed chase in 2012. Tuter shot at Michael Allen 41 times. Defense lawyers representing Tuter are using the go-to excuse for cops that murder people of “I feared for my life.” He initially claimed that he had to shoot him because Allen rammed his truck into Tuter’s car. However, dashcam video showed that it was Tuter who ran into Allen.

Tuter also claimed that Allen was reaching down for something. Garland Officer William Norris contradicted that contention in his testimony, stating that Tuter was “reckless” in his actions and put the rest of the cops involved in the chase in danger with his gunfire. Other officers at the scene also testified that Allen had his hands on the steering wheel at the time Officer Tuter began shooting at him. In spite of the amount of shots Tuter fired at an unarmed person and the lies in his story exposed by both video and other police officers, Tuter was only charged with manslaughter.

Via WFAA.com, the Dallas ABC affiliate:

It all started when Patrick Tuter, a six-year veteran of the force at the time, recognized Michael Allen’s truck from another police chase earlier that week. He tried to pull him over, which led to a chase through multiple cities, ultimately ending in gunfire.

Prosecutors called Tuter “reckless,” saying that seasoned officers will testify he went beyond what was necessary. Allen didn’t have a weapon in the vehicle.

Tuter was fired after an internal investigation.

But defense attorney Robert Rogers said Tuter feared he would die if he didn’t use deadly force, painting Allen as a dangerous felon who had meth in his system.

Allen’s mother, Stephanie, was the first to take the stand Tuesday, tearfully remembering the day she learned her son had died.

Then, Lt. Clay Lacey, of Texas DPS, took the stand. He was in the DPS chopper the night of the chase and answered questions about chopper surveillance video. He estimated the chase topped 80 to 100 mph at some points.

Ultimately, Allen wound up in a Mesquite cul-de-sac, with Tuter on his tail, and multiple other police vehicles behind them. The two vehicles collided and ended up front to front. A second police vehicle then struck Allen’s truck, sandwiching him in. The surveillance video appears to show Allen continue to accelerate.

Defense attorneys say Allen bent down to reach for something and that’s when Tuter feared for his life and fired shots. They said he fired until Allen stopped accelerating and the threat was over.

But prosecutors argue Allen had his hands on the wheel and was trying to leave.