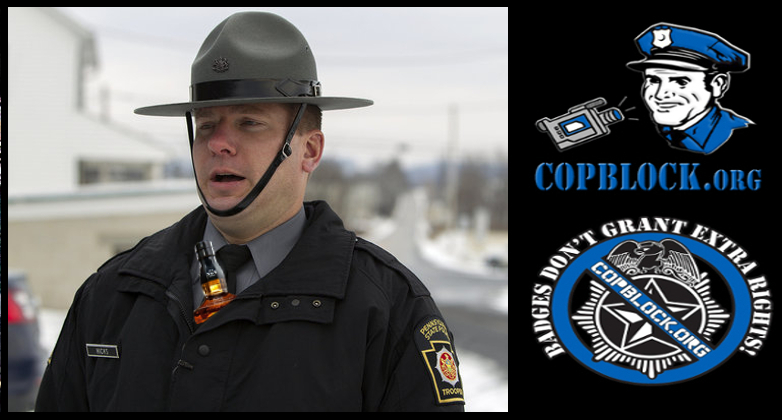 Trooper Robert T. Hicks was arrested in November for driving under the influence. At the time he was stopped by police in Lower Allen Township his blood alcohol level was 0.232 percent, which is just slightly under three times the legal limit for impairment of 0.08 percent.

Via the York Daily Record:

A Pennsylvania trooper who worked as a state police spokesperson was charged last week for driving under the influence, according to department officials and online court records.

Robert Hicks was stopped in Cumberland County on Nov. 12 by Lower Allen Township Police. According to wgal.com, police said Hicks had been “weaving in and out” of his driving lane, and said his blood alcohol content was .232, about three times the legal limit.

State police was made aware of the incident soon after it happened and is conducting an internal investigation, said state police communications director Ryan Tarkowski.

Hicks is still employed by Pennsylvania State Police, Tarkowski said, but would not comment further.

Hicks was a the public information officer for Troop H in Harrisburg, which includes stations in York, Adams and Cumberland counties. He would often respond to major breaking news scenes and speak with media to fill reporters in on what happened. He has been with Pennsylvania State Police since 2007, Tarkowski said.

A preliminary hearing has been scheduled for Jan. 20 next year with District Judge Charles A. Clement Jr. in Cumberland County.

In the video embedded below, Trooper Hicks can be seen performing his duties in as a police spokesman in 2014 while announcing that the Pennsylvania State Police will be cracking down on DUI’s during Labor Day weekend via “more DUI checkpoints, increased patrols, and an overall law enforcement increase in presence.” After discussing the dangers of driving drunk Hicks implores people to “do the right thing” and be responsible by not drinking and driving. “If you choose to drink, make sure you have a designated driver,” Hicks said.

Apparently, he was a bit too drunk to remember that advice on November 12th. Trooper Hicks has been charged with DUI: Highest rate of alcohol (BAC .16+) first offense and DUI: general impairment/incapable of driving safely first offense.