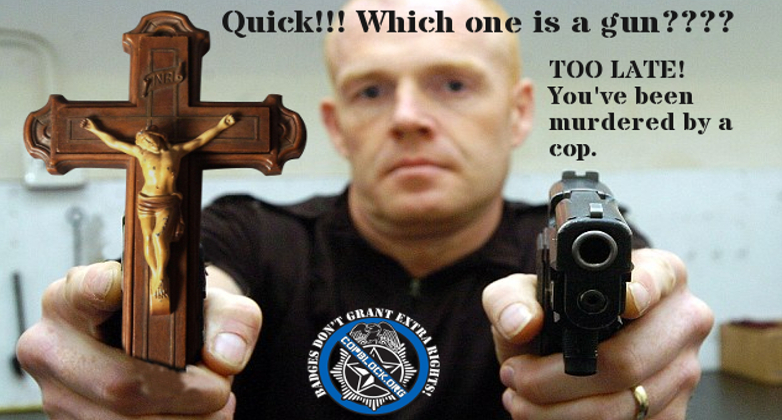 A cop in Bakersfield has been placed on routine paid vacation after he shot an unarmed and completely innocent 73 year old man nine times. His excuse for the shooting was that he thought a crucifix Francisco Serna had was actually a gun. It’s not clear at this time if Serna was even holding the crucifix at the time he was murdered.

At the time Officer Reagan Selman fired his gun Serna was already surrounded by six other officers. Selman was the only one of the seven that feared for his life enough to shoot at him. The officers had been responding to a call from someone in the neighborhood that someone was “outside with a gun.” (Which is not actually illegal.) Bakersfield police have claimed that Serna didn’t respond to commands to take his hands out of his pockets.

However, according to Heavy.com, a grand total of 20 seconds passed between the time the neighbor who had called pointed out Serna to the officers who responded and Officer Selman fired the nine shots at him. They had already been informed by the dispatch that Serna was known to be suffering from dementia.

That indicates that they were already familiar with him and probably should have known that he wasn’t someone they should assume would be a threat. It also shows they made no effort to figure out what was really going on before Selman came in guns blazing and executed Serna.

Francisco Serna was shot after police said he failed to respond to orders to stop approaching and remove his hands from his jacket.

One of the seven officers at the call, Reagan Selman, fired seven shots at Serna, who died at the scene.

“BDP murdered my father for no reason,” daughter Laura Serna told CNN affiliate KERO. CNN reached out to members of the Serna family on Tuesday night but didn’t get a response.

Eight detectives are looking into the shooting, Martin said.

“I cannot tell you enough that this community is affected by Mr. Serna losing his life,” Martin told reporters. “This is a tragic incident for their family, for the community as a whole, and for the police department.”

A woman who answered a phone number listed for Selman’s wife said they didn’t want to comment.

All seven officers are on leave, Martin said. CNN called the police benevolent association, which will support the officers during the investigation, for comment but didn’t get a response.

The people who called the police Monday morning lived across the street from Serna. A woman told detectives she was dropped off at home about 12:35 a.m when a man approached her in her driveway and asked about where she lived.

She thought she saw a dark brown or black handle of a gun, went inside and told her husband to call police. He told a 911 operator the man had a revolver.

Police arrived six minutes later and when the woman saw Serna come out of his house, she said, “That’s him,” according to the police statement.

Serna came across the street and Selman, who has been with the department since July 2015, fired as Serna was about 15 to 20 feet from him.

No other officer fired and no lower levels of force were attempted, said Martin, who becomes chief on Wednesday.

CNN affiliate KBAK reported that Serna’s family said he would take short walks around the area near his house when he couldn’t sleep.