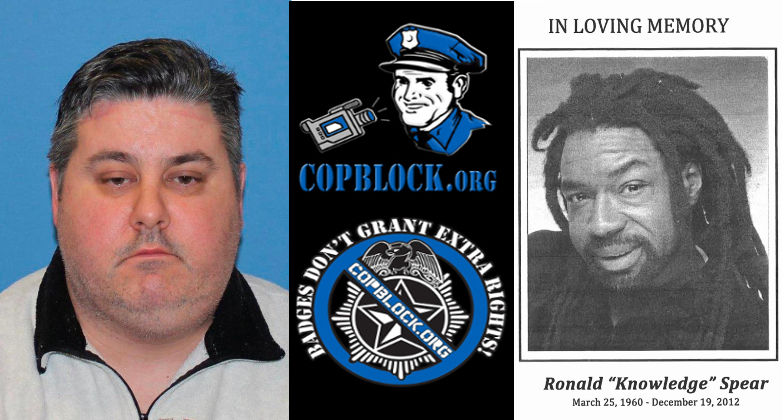 Correction Officer Brian Coll was so proud of himself after he beat a man to death in 2012 that he kept a framed newspaper article about the murder in his bedroom. The guard at Rikers Island is currently on trial for repeatedly kicking inmate Ronald Spear in the head as Correction Officers Anthony Torres and Byron Taylor held him down. The beating resulted in severe head trauma and caused Spear to suffer a fatal heart attack shortly afterward.

Spear was suffering from end stage renal failure and required daily dialysis. He also had to walk with a cane due to his disability. Officer Coll had prevented Spear from seeing the doctor within the infirmary. This led to a argument between the two during which Coll began assaulting Spear. After punching him several times in the face and stomach Coll began kicking Spear like a “field goal kicker” while the other two guards held him down. At the same time he taunted Spear, yelling for him to “remember who had done that to him.”

His victim didn’t end up having long to remember the vicious assault since he died soon after. In order to cover for Coll, he and the other guards wrote false reports stating that Spear was the aggressor. Officer Torres later received a $10,000 workman’s comp settlement for injuries he suffered while holding Spear down. Torres and Officer Taylor have both since pled guilty to obstruction of justice charges and are testifying against Coll as part of a plea deal.

Officer Coll is facing charges of obstruction and “death resulting from deprivation of rights under color of law.” The latter charge carries a potential life sentence. (Although, I wouldn’t hold your breath on that.) It was during his arrest that the framed news article was discovered displayed in his bedroom as if to commemorate his murderous deed.

“Let’s call it what it is: a trophy,” Assistant U.S. Attorney Brooke Cucinella said in her closing argument against Correction Officer Brian Coll.

Prosecutors say Coll repeatedly kicked Ronald Spear in the head and the resulting brain injury he suffered led to a fatal heart attack.

In her nearly hourlong argument, Cucinella described Spear’s final moments on Dec. 19, 2012, as terrifying — filled with pain as his life slipped away.

The inmate — who got into an argument with the former correction officer after Coll allegedly denied him a doctor — felt each of the “field goal”-like kick (sic) while groaning.

The death blows were accompanied by taunting, according to Cucinella.

“The last hateful words that Ronald Spear would ever hear — ‘This is what you get for f—ing with me, remember I did this’” she said Coll told the victim.

Cucinella also showed the jury autopsy photos of Spear’s skull with the skin pulled back, as well as his brain, which displayed large purple-red patches indicative of bleeding.

The prosecutor’s push for conviction included a back story on Rikers’ culture which, in her accounting, treated whistleblowers as snitches — and enabled abuse of power.

It’s rather amazing how all these Good Cops managed to create a “culture” in which anyone who reported abuses was treated as a snitch and where two Heroes responded to an inmate being beat to death by a psychotic murderer by holding him down while he kicked him in his head repeatedly, then lied about how he died.