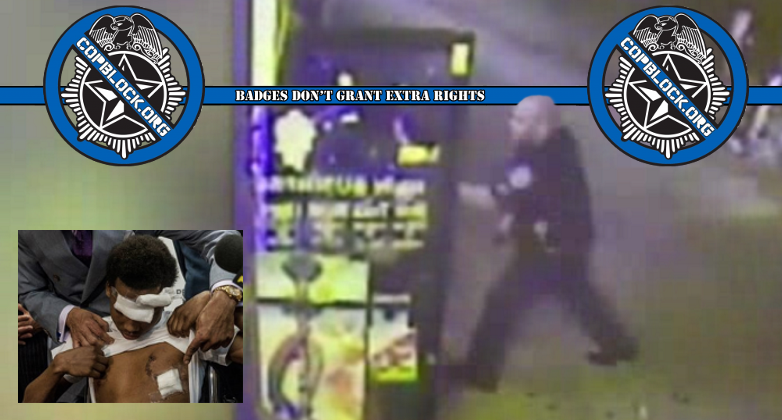 Last Year, CopBlock Network contributor Asa J wrote about a May 2014 incident in which a 14 year old boy was assaulted and thrown through a Bronx storefront window while handcuffed. That teen, Javier Payne, weighed just 89 pounds at the time he was deliberately and viciously attacked by NYPD Sgt. Eliezer Pabon, which was caught on surveillance video (embedded below) at the Hookah Spot, the owner of the window.

As a result of the injuries he sustained from being shoved through the window, Payne had to have emergency surgery to remove glass shards from his heart and lungs. He also had severe lacerations to his face. In all, over 50 stitches were required to close the wounds Sgt. Pabon inflicted upon Payne that day.

In spite of Payne almost being killed by Pabon’s actions, the New York District Attorney decided he should face no charges because the window already had a crack in it and he was wearing a Magical Suit at the he committed aggravated assault against a handcuffed teenager. The supposed justification for the potentially deadly act of child abuse was that Payne was “mouthing off to the officers.”

Earlier this week, it was announced that after an internal disciplinary hearing Sgt. Pabon’s ultimate “punishment” will be to lose five whole days of vacation. Reportedly, Assistant Deputy Commissioner for Trials Nancy Ryan recommended the five day penalty because she felt that pushing someone isn’t as bad as punching or kicking someone. Because you know if you or I came within inches of killing someone they would obviously say, “well at least he didn’t kick him” and give us a moderately painful slap on the wrist as punishment.

Not surprisingly, Payne’s family and lawyer were not too happy with the decision.

The Bronx NYPD sergeant who shoved a handcuffed teen into a store window — shattering the glass and critically injuring the youth — was docked five vacation days, a penalty his lawyer called an “outrage” in light of a Daily News report about another cop punished more harshly for criticizing the mayor on video.

Former NYPD Commissioner Bill Bratton in May signed off on the penalty against Sgt. Eliezer Pabon, who was found guilty of using excessive force against then-14-year-old Javier Payne at an administrative trial, police sources said.

“Javier and his mother are outraged,” the attorney said. “You penalize one police officer for merely stating something verbally and you give him eight vacation days and another one who has been found guilty by a tribunal of using excessive force and nearly killing this young man — you’re giving him five days.

“What’s the public to think — that it’s worse for a cop to complain about his bosses than it is to lay his hands on people and use excessive force?” he added.

Payne and a friend were busted on Arthur Ave. in May 2014 for allegedly punching a man in the face after asking him for a cigarette.

Payne was handcuffed and apparently mouthing off when Pabon was seen on security surveillance video pushing him into the front window of Hookah Spot, a 24-hour convenience store.

The shattered glass nearly killed Payne. His lung was punctured and shards of glass had to be removed from near his heart.

“He had to be rushed into surgery,” Rynecki said. “It literally almost took his life.”

Of course, the public should at this point already be aware that police have free rein to attack and even murder citizens, but even those Heroes cannot be allowed to challenge their own political overlords. Throwing a mere mortal through a window in no way compares to disrespecting the hierarchy of government. The lives of “the public” are expendable. The precious system that ensures that remains the case isn’t.