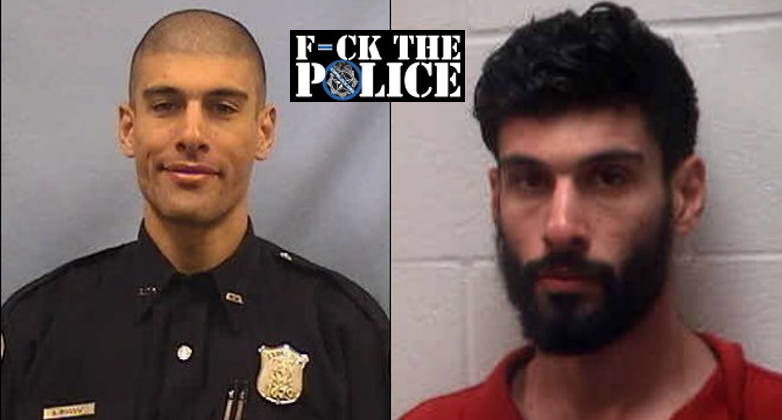 After kicking down the door to the house of his ex-fiance’s family, Officer Phillip Barresi, yelled “fuck da police!” in response to her father mentioning that they should call the police. The Atlanta police rookie, who was not on duty at the time, was however in full uniform and reportedly was holding his hand on his department issued gun during the time he was inside the house. Barresi later claimed that he accidentally kicked the door open and  “regretted his actions.”

He also attempted to justify his actions by saying that he was “extremely upset” because his ex-fiance, who has not been publicly identified, broke into his house. The victim however stated that she had not broken into his house, but had visited his house to retrieve some of her and her baby’s possessions, which she had left at the house when moving out. Barresi had to drive about thirty miles from his home in Jonesboro to reach the house where his ex-fiance was living with her parents and sister.

Officer Barresi has only been with the Atlanta Police Department since March of this year. The charges against him include home invasion and second degree criminal damage to property. The attack was committed on November 28th. He has since been placed on paid vacation until the department and district attorneys are finished going through the motions of prosecuting him and a judge sentences him, most likely as part of some plea deal that guarantees he will only get probation.

Via the Atlanta Journal Constitution:

Officer Phillip Barresi, a Jonesboro resident, drove to a home in Locust Grove where his ex-fiancée was staying with her sister and parents, according to a police report. Police said Barresi kicked down the door, forced his way inside the Draba Lane home and threatened the woman and her family…

A male resident of the house said he heard the doorbell ring repeatedly, then heard someone kicking at the door four times. The door then broke open, the report said.

The resident saw Barresi in his APD uniform come into the home with his hand on his gun and yell out several things, some of which he could not remember because he was “so frightened,” the report said.

While I support people’s right to say “fuck da police” (even the police themselves), the whole putting your uniform on, driving thirty miles, “accidentally” kicking your ex’s door down, and then running around making threats with your hand on your gun thing is probably a bit of a warning sign. Especially, since cops are at least four times as likely to abuse their children and/or wives than the average person is. In all likelihood, it’s just a matter of time before he ends up getting fired for some sort of domestic battery incident from the next department he gets hired at after he is allowed to resign from the APD.