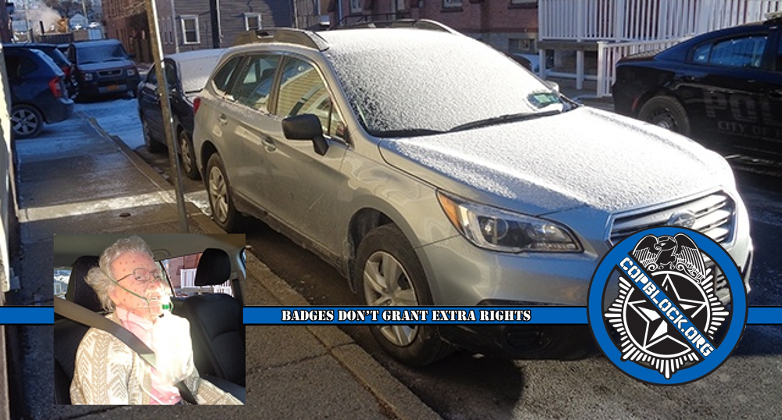 Police in Hudson, New York sprang into action after they received reports that an elderly woman had frozen to death in a car parked on a city street. When she failed to move or respond in any way to their efforts to make contact with her, a “quick-acting” officer broke out one of the back windows and opened the door. At that point, they realized that they were actually taking part in an elaborate and unintentional version of the “mannequin challenge.”

In reality, their “victim” was just a CPR dummy that was designed to look extremely lifelike (for some bizarre reason) and its owner was none too happy about them breaking his window when he eventually arrived.

The Times Union of Albany reports (http://bit.ly/2hELLPL ) that a caller told police there was an elderly woman “frozen to death” in a parked car.

Officers rushed to the scene and found what appeared to be a woman sitting in a car’s front passenger seat wearing an oxygen mask.

A sergeant busted a rear window, opened the door and discovered that the woman was a realistic mannequin.

The car owner arrived and said he uses the dummy for his job selling medical training aids.

The Hudson police chief, who described the owner as “quite vocal and vulgar” toward the quick-acting sergeant, also issued this warning in a press release:

“It is my understanding that the owner was incredulous that we took action in this matter,” Chief L. Edward Moore said. “He apparently was quite vocal and vulgar to my Sergeant. Just to clear the record, all citizens of Hudson should be put on notice that if you park your locked vehicle on the street on a sub-zero night with a life size realistic mannequin seated in it… we will break your window. I commend everyone who responded with the intentions to help an elderly woman.”

Investigators from the department also for some reason felt it necessary to announce that no charges would be filed against the owner for the non-crime of leaving a really creepy old lady doll in his car overnight and freaking people the fuck out.

To be fair, as you can see by the photo, the mannequin is pretty real looking and most old people do die if the temperature drops below 70 degrees (or rises above 90). So, I don’t blame the cops for making a genuine effort to help an elderly person. In fact, I’d rather have them break someone’s window in an attempt to save someone instead of just piling parking tickets on a car with a dead man inside it for four days or shooting a 73 year old man nine times because they thought his crucifix was a gun.