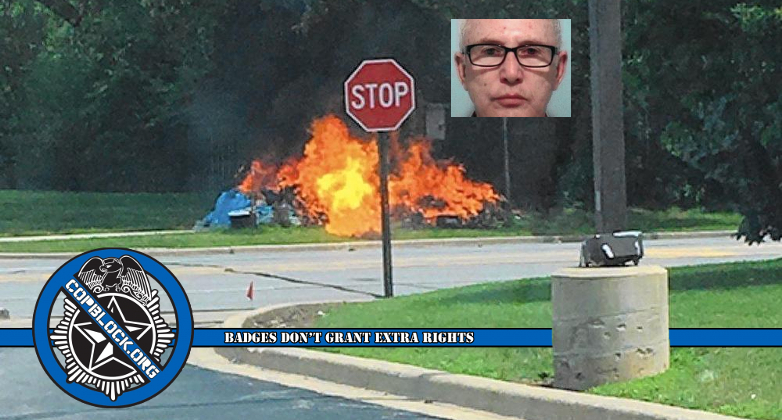 A man who was arrested for arson after he burned the tent and personal belongings of an area homeless man is a retired Chicago police officer. In fact, Sergeant James R. Povolo, much like a slew of other violent cops that have been exposed as criminals, was a former award winning officer.

Although the exact reason for his recognition is unknown (because the Chicago Police Department attempted to hide the fact that he was once one of their Good Cops), the Naperville Sun confirmed, via a FOIA request, that he was recipient of the department’s “Medal of Valor,” which is awarded for acts of “heroism, personal courage, and devotion to duty” by police officers.

The case he stands accused of currently is decidedly unheroic, though. Although investigators haven’t provided any motive for his actions, the victim was an outspoken and well known activist and political protester who has been involved in a long standing battle with the government officials in Naperville.

In the Naperville case, Povolo was arrested less than two weeks after the alleged arson. Prosecutors said he approached Huber’s tent at a time he knew Huber would not be there and set fire to it, reportedly with a cigarette. Police have offered no motive for Povolo’s alleged action and have not disclosed what information prompted them to arrest Povolo.

(Scott) Huber, 66, lost his two-tent encampment and most of his possessions in the blaze. At the time, he said he was most distressed about the destruction of numerous computer discs on which he had stored what he said was the history of his political struggles with Naperville officials, police and local judges.

He has battled Naperville authorities for about 20 years, ever since losing his electronics business and being evicted from his home. He is protesting what he says has been unfair and illegal treatment by authorities.

Povolo’s next court hearing is March 1. The terms of his bond were modified last month so he could travel from his Naperville home in the 1300 block of Dartford Court to his Key Colony Beach home in Florida, where he is a legal resident and where he winters from fall to spring, according to court records. Under the original terms, he could not leave the state without permission from Judge Liam C. Brennan, who is presiding over his trial.

“Defendant (Povolo), because of injuries sustained while employed ‘on the job’ as a police officer for the City of Chicago, has artificial knees, and does not well tolerate cold weather,” Povolo’s attorney Charles Dobra wrote in his petition.

Admittedly, it would be a shame if Povolo had to face the cold unprotected within his Illinois summer home, rather than being afforded the warmth of his winter home in Florida, just because he intentionally and maliciously destroyed the shelter and most of the personal belongings of another man for no apparent reason. He is a Medal of Valor winner, after all.