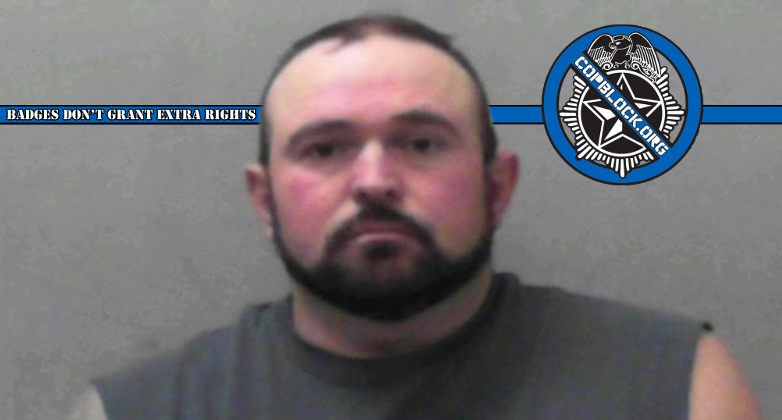 Kevin Woodrum, a former deputy with the Boone County (WV) Sheriff’s Office, was arrested earlier this week and charged with malicious wounding, sexual assault, and domestic battery against his wife. According to a criminal complaint filed in Boone County, Woodrum held his wife hostage while beating, torturing, and raping her over the course of hours. At one point during the ordeal, Woodrum even poured water on her face in an attempt to waterboard her.

West Virginia State Police went to the Woodrum, 43, residence on Saturday to investigate a domestic situation. Woodrum allegedly told officers to leave unless they had a warrant and that his wife was asleep.

After a few minutes, officers were able to speak with the victim and noticed her face was swollen and bruised. She allegedly told officers that Woodrum had been beating and torturing her for hours.

The victim then detailed for officers the harrowing ordeal Woodrum allegedly put her through, including burning her several times with a lighter and cutting off her hair while pouring water on her face in an attempt to “waterboard” her, WSAZ3 reports.

She reportedly said that on Friday night, Woodrum became mad at her and tied her hands and feet to the bed. He allegedly punched her multiple times in the face and ran a lighter across her body burning her.

For the next few hours, the woman said in the complaint, Woodrum sexually assaulted her, threatened to kill her and choked her until she lost consciousness, WSAZ3 reports.

It’s kinda hard to tell what will eventually happen with this case. Police officers have a known propensity for domestic violence, committing abuse against their wives and children at four times the rate of the national average. Police departments and unions also have a well established tendency to protect their Brothas in Blue at the expense of abuse victims. However, it’s been over a decade since Woodrum wore his Magic Suit and the abuse he committed against his wife was pretty outrageous. There’s no guarantee that he’ll get the alumni recognition and Policeman’s Discount that most retired/ex-cops can pretty much count on.