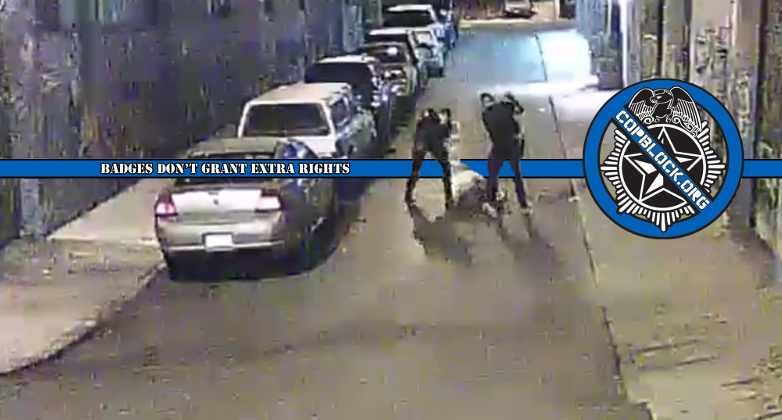 It was announced today that two deputies, who were caught on video beating a man then celebrating and taunting him afterwards, have officially been fired. They also “forgot” to turn their body cameras on during the beating, although one of them accidentally started his during the assault. That footage has not been released yet.

Prior to being fired, they were placed on paid vacation after an investigation began. Alameda County Sheriff’s Deputies Luis Santamaria and Paul Weiber were both charged with assault with a deadly weapon and battery in May of this year, after surveillance video from a nearby business became public.

CopBlock Network Contributor Asa Jay wrote about the video when it was originally released in November of last year.

According to the East Bay Times:

The outrage over the beating that resulted after the video went viral led to criminal charges for Weiber and Santamaria, as well as changes to the Sheriff’s Office’s body camera policies.

Petrov, 29, was beaten with metal batons more than 40 times after deputies chased him in a stolen car from Castro Valley to San Francisco, according to prosecutors.

Authorities said Petrov drove 100 mph while leading deputies on a 40-mile pursuit in a stolen Mercedes. He was wanted on multiple felony warrants.

The deputies were seen chasing Petrov, tackling him and beating him repeatedly on his shoulders, back and possibly his head. The video shows at least 30 blows between the two deputies, some after the suspect attempted to crawl into a fetal position. Petrov stopped running seconds into the video.

The deputies are also facing a civil rights lawsuit that was filed on Petrov’s behalf in August by the Oakland law firm Haddad & Sherwin that says the deputies “brutally beat him without legal cause or purpose.”

The lawsuit says that deputies high-fived and took trophy photos of the broken and bleeding Petrov as he cried for help after the beating. Petrov was not charged related to the beating incident, but was awaiting federal prosecution for an unrelated guns and methamphetamine trafficking case as of August this year.

In addition, as I reported in March, another Alameda County Sheriff’s Deputy was caught trying to bribe a homeless couple that witnessed the attack by offering them jewelry and cash he had stolen from Petrov. He also reportedly gave them a bag of meth and pack of cigarettes. That deputy, Sgt. Shawn Osborne, was fired in July, as a result of the bribery attempt.