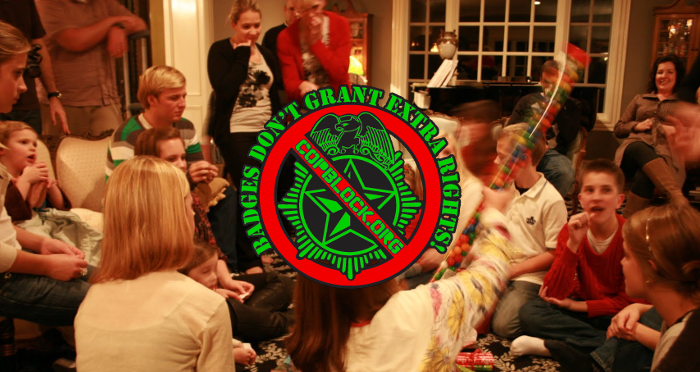 If it comes up, and it probably will, here are some pointers for dealing with the big three arguments of police supporters and apologists.

Christmas is a time for families, feasts, gifts and drawn out arguments about politics and religion with people who you love. If it has come up often in the news the past year, it will probably come up at family Christmas get-togethers, for better or worse. And so this year it is entirely likely that the subject of policing in America will be one of those topics.

Try to remain calm, listen attentively and then respond with irrefutable arguments. Below are some things your family are likely to say and believe about police, followed by facts and ideas to inform your responses to them.

“Police put their lives on the line to protect us.”

There are 17 other jobs more dangerous than policing, and a majority of deaths by law enforcement officers are vehicular accidents, not getting killed by bad guys. When you factor for getting killed criminally by an assailant, only about 5-6 per 100,000 of America’s 800,000 law enforcement officers (with powers of arrest) experience a fatality on the job. Which means that there are only about half as many deaths as the 20th most dangerous profession (10/100,000) – the brave women and men who install the wires that bring our homes internet and telephone services.

Besides the big lie that policing is dangerous, they are not doing it to protect us. Take away the paychecks and special policing privileges and see how many show up out of the goodness of their hearts to keep us safe.

“Who you gonna call when the galactic butt monkeys rape your children?”

Okay, they may not say it like that. But they probably are going to appeal to the necessity of policing based on the constant threat of evildoers, an absurd notion in and of itself. Most people never experience a violent crime in their entire lives. Of those that do the majority are attacked by a family member, friend or somebody else that they know. Those crimes that do occur by random evildoers have a very low clearance rate, meaning they are, more often than not, never solved.

So if something bad happens to you or your loved ones you should be prepared to deal with it yourselves, or let it go. Assume responsibility and risk for your own safety, because police aren’t going to even when they insist that is their purpose. You might as well call for a pizza if you need something to make you feel better, because it will likely be more effective than police. Relying on them will just add to the frustration, confusion and unanswerable questions your tragedy has already stirred up.

The only problem here is that if you take justice into your own hands, you will become the next victim of police and the legal system. They will protect criminals to profit from the enforcement and prosecution of their laws. Their monopoly on violence binds you to their service, removing choice and self-responsibility, which is the key component to self-ownership. You are essentially owned by those who claim responsibility for you, whether they they take that responsibility seriously or not. Policing is slavery.

“If you don’t like it then just obey the law.”

There are several problems with this decrepit suggestion. First of all, many of the laws are inhumane. The punishments for victimless crimes always far exceed the damage of the crime itself. The laws are the problem and obeying them mindlessly and suggesting everyone else does is basically just saying that you should consent to and assist police and politicians with cruel, inhumane acts that deny humans freedom, liberty and self-ownership. You should not, and by appealing to your loved ones values you should be able to make them see why they should not either.

Besides that, the average person breaks about 3 laws a day. We are all potential criminals, and police will use these laws against anybody when it suits them, regardless of how much you support the police. They aren’t a rock band. They don’t have to please their fans to succeed because…

We have no choice in policing services. Unlike almost every other kind of service we do not get to choose the laws and enforcement agencies or methods. These are forced on us without any choice whatsoever. And through taxation you are forced to pay for it. If you don’t pay, the government will send a court summons. If you ignore that they will send police to kidnap you and lock you up while they figure out how they are going to force you how to pay for a service you never asked for. If you try to evade the police kidnappers, they may end up killing you. Without the constant threat of theft and violence, they could not exist. They are the bad guys.

Your family may hypothesize that taxes and government services are voluntary. However, there has never once in history been a state that taxed its citizens without the duress of aggression. Such hypotheses are without any rational grounds whatsoever.

And for the religious people in your family, remind them that they are celebrating the birth of Jesus Christ, a man that spoke out against the authority of the state and its enforcers and was then killed by them. Jesus was killed by cops…