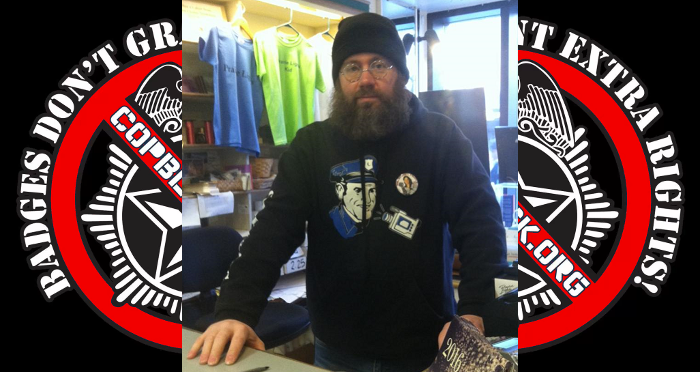 I am a Cop Block Network contributor, activist, educator, philosopher and artist. I am by no means a legal expert. But often I am asked questions, so I have created Ask A Cop Blocker as a way to answer as many of our reader inquiries as I can.

Recently Cop Block has been making some big changes. As a part of that we are making greater efforts to interact with our readers. So recently I have been posting the following message to our Facebook page in order to help provide information and show that we care about what is on your mind:

Do you have a genuine question that you would like to ask a Cop Block Network contributor?
Message me at the Joshua Scott Hotchkin page and submit your questions and who, if not me, you would like to have answer it.
I will field all legitimate questions and post them along with the answers on this page within a weekday or two of receiving your question.
Trolls and agitators will be dismissed out of hand.

The following are the questions and responses from the most recent Ask A Cop Blocker interactions.

Bear Dilks writes:
Hi there. I’ve followed you guys now 3-4 years and I wanted to say 1st off cuz I’m sure you don’t hear it enough…thanks for all that you do. K that done here’s my question…I think there is a very very volatile situation brewing at a rapid pace at the Standing Water ND. Sioux protest…I’ve noticed that major media has avoided covering the situation for the most part and so I was wondering if you have looked into it at all? The police on scene, from the videos I’ve seen have been getting progressively more violent so I naturally thought of you guys and figured I’d see what your take is on the whole thing. Thanks, Bear Dilks

Joshua Scott Hotchkin answers:
I have been following the events at Standing Rock, perhaps not extensively, but certainly beyond the average American. I personally support the Water Protectors and those standing with them. Government protected energy monopolies have no rights to the lands of these people. Nor are they entitled to conduct business in ways that destroy the environment and damage the resources that they did not create.
This is exactly what government is. It is a tool by which economic interests form monopolies and uphold them via the promise or application of aggression. It is a gang pretending to be the will of the people by providing a suggestion box that never changes anything.
And police are the muscle that applies the aggression that sustains the monopolies we are all enslaved to.
Lest you think I have gotten off track, let me explain why I pointed this out.
NO PROTEST FOR A SINGLE CAUSE EVER AFFECTS LASTING CHANGE.
While I still support protests of the government and the corporate entities it charters, if only for making people question things, I have no delusions that they can fix anything.
So long as police and the state exist, this is how things will be. It is time we join a single cause, which is disassembling these power structures that enslave us and destroy the environment.
Water Protectors, Black Lives Matter, Bundy Ranch supporters, Juggalos and any and everyone else adversely impacted by the state and its aggression need to fight the core enemy – the institution of monopolized aggression itself.
While we divide our complaints against it into ever smaller pieces, the state continues to grow and become more oppressive. And as it does, the jackbooted thugs whom it hires to keep us obedient will just get nastier and nastier.
Abolish police and disassemble the state!

One further note here…
To all the ‘but private police would be better’ people – well, I guess you were wrong. They are still jackbooted thugs who gather around power structures and oppress individuals.

Confidential Informants and Search Warrants…
Leslie Byers asks:
Is it legal for the authorities to search a residence based only on a confidential informant and neighbor complaints for traffic? If so do I as the subject of the search have the right to request information that may be beneficial to a defense in court?

Joshua Scott Hotchkin replies:
Authorities cannot search your home without a warrant except in the most extenuating of circumstances, of which informants or traffic complaints certainly do not count as extenuating.
For neighbor traffic complaints there is no sane judge who would issue a residential search warrant.
There have been two federal rulings used as precedents in whether a warrant can be issued based on information from a confidential informant. It also varies which precedent is considered in different states at their lower courts.
Here is some information explaining more about the circumstances under which a warrant may be issued based on information from a confidential informant.
https://www.hg.org/article.asp?id=34191
However the decision is ultimately up to a judge and relies on human factors as much as objective guidelines. But a judge’s decision to issue a warrant can later be challenged in court, which would render all of the evidence gained in the search inadmissible.
The prosecution cannot use evidence against you that they have not made open to you. This is called ‘Discovery’. You have a right to view all evidence that will be used against you, but not necessarily their overall prosecution strategy.
http://www.nolo.com/legal-encyclopedia/what-when-the-prosecution-must-disclose.html
But as I always say, the system doesn’t play fair and I am not a lawyer. So be sure to follow up with your own research and if you need legal help, contact an attorney. Peace and prosperity, Leslie!

Source of Authority…
Jeff Noah asks:
Anytime a new law / tax / fine / regulation is passed and pushed down our throats, how are any of them considered legal in any way shape or form since the politicians and police who are creating them only have the authority to do so because they gave the authority to THEMSELVES? If they can assume false authority under the ‘because we say so’ rule, how is it illegal for any citizen to simply say,”I don’t have to follow your laws or pay your fines because I give myself the authority to refuse”? “Government gives us the authority,” isn’t a valid answer since, as stated already, government gave ITSELF the authority to grant authority.

Joshua Scott Hotchkin replies:
All authority derives it powers from a single source – the threat of violence. Government can only exist using a monopoly on organized aggression to force individuals to follow its dictates.
No authority exists dependent of that aggression. While some people will tell you that they would voluntarily pay all the taxes and follow all the laws without the implied threat looming over them, no such situation has ever existed. No government has ever been voluntary. They have all forced themselves on individuals via the threat of aggression. Legal and illegal are meaningless terms outside of that authority. What they mean within it is merely a description of when and how the state will steal, extort, kidnap, imprison, torture and/or kill. And they don’t even follow their guidelines. Nor is it reasonable to expect them to. Accountability is futile, abolish the state!

What Can Cop Block Do…
Dom C. Ali writes:
What can Cop Block do to balance out the police campaign of ‘We Back the Badge?’….it seems like, people support the police killings over infractions just to feel safe. Fear/force by any government entity is tyranny.

Joshua Scott Hotchkin:
The real question is – WHAT CAN YOU DO…?
We are pretty much trying everything we can think of to break the spell of mindless obedience and the cult of false heroism. We are always willing to hear ideas, but no changes will come until all of you become just as persistent as us. And the best place to begin is in everyday conversations with your friends, family and anyone else you can get to listen to your message. Word of mouth is our most powerful tool, and that is something we cannot do without you.
Fear/force is precisely where government derives its authority. The state is tyranny, and the police are its hired guns.
#AbolishThePolice
#AbolishTheState

Legal Capacity to Enforce Laws…
Peter Osborne Writes:
I’m in Australia but think this question will still be relevant to all . Does an entity like a police officer who acts under the state or similar hold the legal capacity to enforce anything upon a member of the public?

Joshua Scott Hotchkin replies:
Laws do not exist independent of entities which create and enforce them. The state IS the law. There is no reason to expect consistency or accountability. That would be like expecting a marathon runner to slow down every time the other runners got too far behind them. The state exists to create an advantage for the ruling class, and that advantage extends to those who enforce its agendas. There is no such thing as abuse of authority because all authority is abuse. It is abuse of individuals. The state and its agents can and will do whatever they want, because that is the entire reason they exist.

Cops and Questions…
Glennon Bradley Priester writes:
I was pulled over a few weeks ago for speeding. I live in a small town in pacific mo. The cop got a little agitated when he seen my I phone recording the stop. And he seemed more interested in where I came from and where I was going and why I was recording instead of why he pulled me over, speeding 8 miles over. He kept asking me questions and my answers were, how does this pertain to this traffic stop? So 40 minutes later the cop gives me back my license and insurance card no ticket. Why do cops do this?

Joshua Scott Hotchkin responds:
Clearance rates for violent crimes and theft reveal that cops are really bad at stopping criminals and catching them. This is because police usually hire those of average or below average intelligence; they make better unquestioning order-followers. So since they are incapable of doing police work that involves critical analysis they must rely on crude methods that rely on persistence and intimidation to lure you into self-incrimination. And with such a vast arsenal of laws at their disposal, if they can get you talking there is a good chance they will eventually find a legal reason to criminalize you.
This is why you should never answer any questions. Give them the information they need – I.D., registration and proof of insurance – and respond to questions with: “I don’t answer questions.”
Ask if you are being detained under suspicion of a crime. If not ask them if you are free to go. If they have no probable cause to detain you, they will be forced to let you go.
But answering questions will just encourage them to keep asking them. Stick to your silence and get away from the pirates as quickly as possible, they are super dangerous.

Thanks for all of the great questions and keep sending them. I will do my best to answer them to the best of my ability, research them or pass them off to those who might have a better response. You can also request a different contributor to respond. But as with any other thing, do not believe me or anybody else. Do your own research, question everything and think for yourself.

Remember…I will only answer questions asked directly to me by messaging my Joshua Scott Hotchkin Facebook page.