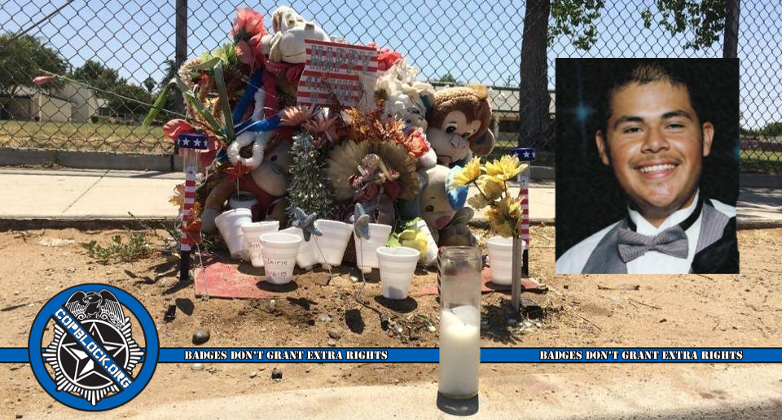 The family of a man who was shot as he climbed a fence then executed by a Fresno police officer  has received a settlement of $2.2 million. In June of 2012, Jaime Reyes Jr. was shot by Officer Juan Avila while attempting to escape arrest by climbing over a fence near a school. After falling from that fence, Reyes was then shot in the back an additional three times by Avila as he lay wounded and defenseless on the ground.

The fact that the fence Reyes was climbing was at an elementary school and that police later found a gun in his pocket were used as justifications for the murder. However, information released as a result of the law suit indicated that the gun was not only unloaded, but also was inside a plastic bag. Therefore, in spite of police claims that Reyes represented an “imminent threat,” there’s no way he threatened them with it or even could have done so at the time he was shot. One of the officers at the scene also stated in a deposition that there was a pause between the time Avila shot Reyes the first time and the subsequent three shots.

Supposedly, along with the settlement that taxpayers will be forced to finance, the Fresno Police Department will be explaining to the cops working there what the word imminent actually means and making other “minor changes” within their use of force policies. That includes teaching cops to assess whether someone needs to be shot in the back while they are already lying on the ground unable to move.

In addition, homicide detectives and Internal Affairs officers will be strongly encouraged not to ignore witnesses who provide information that doesn’t fit the predetermined narrative. For instance, in this case a woman who witnessed Officer Avila murder Reyes stated that she “saw an execution,” but officers with internal affairs were reported (by me) to have responded by putting their fingers in their ears and yelling, “I can’t hear you” until she gave up and left the area.

Via the Fresno Bee:

With the settlement comes major changes for the Fresno Police Department, said Oakland attorneys Michael Haddad and Julia Sherwin, who represented the parents of Jaime Reyes Jr., 28, who was shot while climbing a fence at Aynesworth Elementary School in southeast Fresno in the afternoon of June 6, 2012.

Haddad said Tuesday that if the lawsuit had gone to trial, the evidence would have shown that Officer Juan Avila shot Reyes near the top of the fence. Once Reyes toppled to the ground, Avila shot him three more times in the back as he lay wounded, face down on the ground, Haddad said…

Fresno police Chief Jerry Dyer acknowledged that the city has agreed to review policies and recommend any appropriate minor changes. The city, Dyer said, “has always felt that this tragic shooting was legally justified and settlement should not be viewed as an indication that this view has changed.”

According to Dyer, Reyes was a gang member under the influence of methamphetamine who fled from officers while carrying a stolen handgun into a schoolyard occupied by children. “However, circumstances unrelated to the actual incident have dictated that it would be economically sound for the city to settle this matter before incurring the costs of trial,” he said.

Documents provided by the Fresno Police Department say the fatal shooting of Reyes was justified. Avila no longer works as a Fresno police officer.

Haddad disagreed with Dyer’s assessment of facts. He said Reyes never pointed a gun at the officers nor threatened them. After he was fatally shot, officers found a gun in Reyes’ shorts pocket, but the firearm was unloaded and wrapped in a plastic bag.

City officials agreed to the settlement on Nov. 18 in U.S. District Court in Fresno. As part of the settlement, Haddad said the Fresno Police Department has agreed to change its use-of-force policy. Before, officers could shoot a suspect if he posed an imminent threat. “Fresno police have a unique interpretation of what ‘imminent threat’ means,” Haddad said. To police, it means a pending threat or a threat in the near future, Haddad said.

The settlement mandates that Fresno police are only allowed to shoot a suspect if the suspect poses an “immediate threat,” or a threat at this very moment, Haddad said.

Sergeants and patrol officers also will be trained to “assess every shot,” Haddad said. This way, an officer doesn’t fire extra bullets when the situation doesn’t warrant it, Haddad said, noting that Reyes was incapacitated with the first shot, therefore he didn’t need to be shot three more times in the back.

In addition, the settlement requires additional training for homicide detectives and the police Internal Affairs officers. The training will require them to consider statements by witnesses that contradict statements by officers at the scene. In the Reyes shooting, a female witness said she “saw an execution,” Haddad said. But homicide detectives and Internal Affairs officers disregarded her statement, Haddad said.

“We’re hopeful that these policy changes could prevent some future shootings by police,” he said.

Minor policy changes that reiterate what cops and the cops that “investigate” them should already be doing is likely to do that.