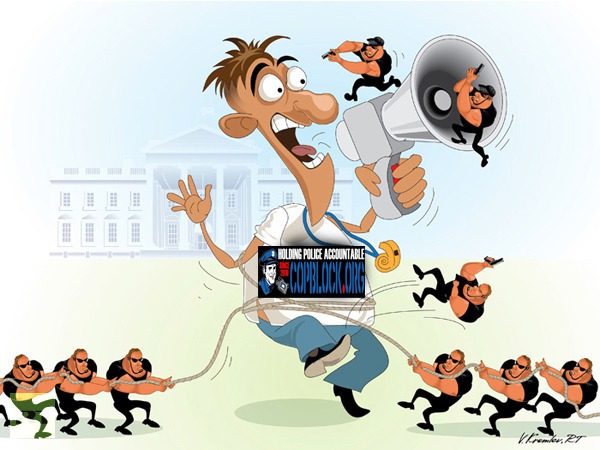 This video by Al Jazeera, Blowing the Whistle on Obama’s America, parallels many key concepts addressed by Cop Block that can be summarized with the question: Who watches the watchmen?

Often the best source of information about waste, fraud and abuse in government is a government employee committed to public integrity, willing to speak out. Such acts of courage and patriotism … should be encouraged rather than stifled.

Yet, acting on claimed authority supposedly created out of thin air back in 1917 when some people now long-dead signed their names to the Espionage Act, Obama is responsible for levying threats at half a dozen individuals for for doing just that. Most well-known of the six is Bradley Manning, who allegedly provided content to WikiLeaks, which in addition to embarrassing some of Obama’s colleagues, depicted the cold satisfaction had by some wearing American flag patches as they fired from their helicopter on individuals on a Baghdad street.

Video evidence of the incident exists – it’s clear those slain weren’t aggressors, yet have those responsible been held accountable? Why would Obama, who not too long ago touted the very attributes according to which Manning is alleged to have acted, target him and not those who acted in the wrong?

How often does that exact thing happen here closer to home? How frequent is it that an actor is held accountable for rights-violating actions when that individual happens to wear a badge? Even when video clearly shows they were in the wrong?

Why is that those seek to bring attention to these rights transgressions are often further threatened through the stacking of charges, theft of property, or other “legal” mechanism?

As despicable as it is, these threats made against whistleblowers should come as no surprise to any of us. After all, whistleblowers point-out wrongs, which rightly causes the legitimacy of those who claim authority over others to be questioned.

Many unthinkingly look to Obama as a “leader,” even if their own views and values don’t align with his, based only on the title he holds. That blind obedience to claimed arbitrary authority is the crux of the problem. And that too is the root of the problem here at home too when talking about police.

The wholesale slaughter of strangers abroad and the systematic rights-violations by police employees and their almost-certain unaccountability is but a natural consequence of belief in a bad idea: that some individuals have the right, based on their place of employment, to do things wrong for you or I. Police employees, for example, claim to “serve and protect” you, yet in order to accomplish that they first steal from you. Don’t for a second let yourself be misled to “taxation” as anything but theft. Language is important.

The movement by the Obama and your local police chief and their lackeys to label as “criminals” those who question their actions is just symptomatic of the claimed double standards by which they operate. The very structure is based on a claimed “legitimate” right to use violence. Its actors suffer from perverse incentives.

To bring about real accountability we must each see past the dressed-up language and fancy outfits of those who claim authority. We must realize that it is individuals, not an entire branch of the military or local police agency that is responsible for actions.

So who watches the watchmen?

It’s clearly not the mainstream media. As noted by Jesselyn Radack, who was interviewed in the video and herself threatened after making public information that Obama wanted to keep censored, due to their “cozy” relationship with government actors mainstream media has largely remained silent as threats against whistleblowers have been levied.

And though Radack is on the right track by stating that media ought not be a lapdog, but a watchdog, of government, why stop there? How can she, someone who’s personally suffered from the actions of those working for that violent institution, not see that such instances are bound to happen simple due to the structure of the system itself?

The same lack of oversight by mainstream media happens on cases more local as well. An individual accused of acting in the wrong by someone with a badge often finds that local media makes their personal information readily made available for public consumption yet those same outlets are silent when the aggressor wears a badge, choosing instead to point, unquestioningly, at “internal investigations” handled by the friends of the aggressor. No amount of oversight could fix that system. So again, who watches the watchmen? Is that even the right question to ask?

At the end of the day you can never get accountability from actors who work within a structure that itself is founded on double-standards. Why willingly lend support, even tacit support, to such a system? Why waste your time trying to “fix” its flaws from the inside – that’s impossible! Why not instead hold individuals accountable for their actions regardless of where they work.

What if we each quit giving allegiance to “the watchmen” and instead govern our own lives? It’ll be a hell of a lot easier to hold someone accountable absent the protection of the bad idea that they actions are somehow different based on their title or costume.

By ceasing to grant authority to the system that claims its actors have extra rights the problems outlined by this post and all too familiar to many of us will largely cease. Yes, there will still be bad people, but the harm they’re able to inflict will be much less severe, much less widespread, and handled much more quickly. Incentives matter.

We each own ourselves. With that comes the freedom, coupled with responsibility, to act, making us each a watchmen unto ourselves.