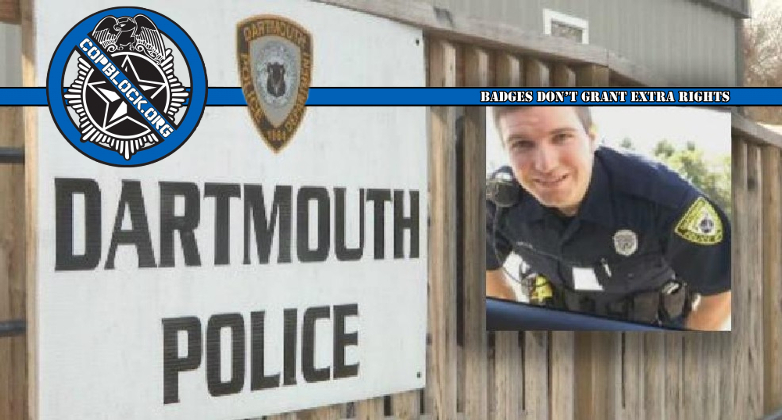 Officer Josh Luis was celebrated as an “exemplary officer” in September on the Facebook page of the Dartmouth (Massachusetts) Police Department for not abusing and/or murdering a minority woman during a traffic stop (see below). Just a few months later though, he has been suspended after his girlfriend reported that he had been abusing her repeatedly over the course of the past year. the reported abuse included threatening her with a gun and sexually assaulting her while threatening to rape her.

According to court documents, the victim claims she was physically and verbally abused on at least 10 separate occasions during the past year.

The victim claims that during one incident, Luis “threatened to rape her while tearing her clothes off,” but stopped.

On another occasion, she said Luis pointed his gun at her before threatening to kill himself if she left him.

The woman also claims Luis took a phone from her several times.

Domestic violence advocates note that his actions are consistent with what they see in many other cases.

“The pattern is overall about power and control and that involves, in fact, controlling how people communicate,” said Pamela MacLeod Lima, who is the executive director of Women’s Center in New Bedford.

Meanwhile, Chief Robert Szala has vowed to investigate even though Luis “is a very competent, very good officer and it’s just an unfortunate situation we’re all in.” Once that investigation concludes, Officer Luis could be taken off paid vacation and instead fired, which would force him to to apply for a job at some other department after his wrist heals from the minor plea deal they offer him.

The Dartmouth Police Department Public Relations Department hasn’t posted anything on their Facebook page (yet) about this “unfortunate situation” or whether his girlfriend is a minority. (Even though they couldn’t post the other one fast enough).

I took a screenshot before they removed it, though. (Not my first day on the internets.)