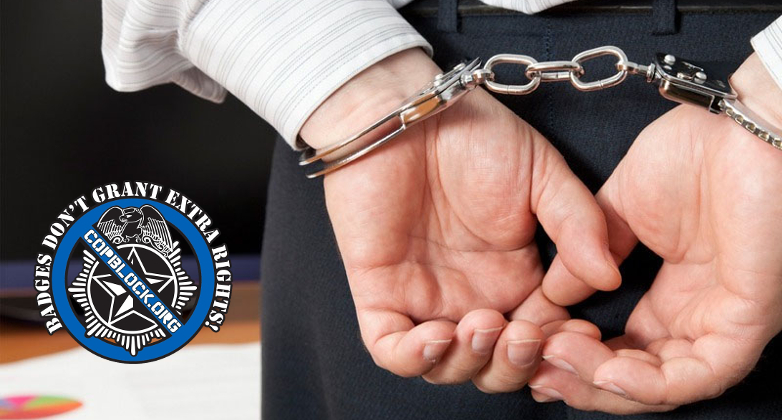 The following post was shared with the CopBlock Network by Richard S. Blum, via the CopBlock.org Submissions Page. In the post, Richard describes being unlawfully arrested by an Illinois police officer and how even after the bogus charge was thrown out it ended up costing him.

A friend and I went to the Winner’s Circle bar in S. Elgin, IL. We were sitting at the bar when Officer Nelson came in and asked the bar back if he could go into the back office to look for the owner, Tammy. As it was her first day on the job, she was confused about what was happening.

She looked at me, so I told her that without a warrant he could not go into the back. That’s when officer Nelson told me to mind my own business and if I have no interest in the bar to keep my mouth shut. He then asked her for permission to go into back office. She looked at me again and I told her that if he has no warrant he cannot go back there. That’s when all attention was directed towards me.

First, he pointed his finger in my face, telling me to show ID; the whole time with his finger one inch from my nose. As I was getting my wallet out, I pointed my index finger at him, saying he should know the law better than me. That’s when he told me that I was under arrest for battery to a police officer. At that point, I was handcuffed, put into his police car, and brought to jail, laughing that I was being jailed for knowing the law.

A month later at the court date, I showed up with my lawyer Gary Topel. The best part was when the judge asked Officer Nelson what happened that day. He said almost the same as I had about the events of the day, but said that he was around ten feet from me, not one inch from me. Also, he a said he was in fear for his life from my index finger even from ten feet away. I could not help but laugh, after which my lawyer said to refrain from that. I didn’t even have a chance to tell my side of the story before the judge threw the charge out.

Months later, while I was looking for a new job, they did a criminal background check on me. To my surprise, there was a battery charge on my record. I thought since it was thrown out of court it would not be on my record. I called Gary Topel and asked him what was going on. He told me to have it taken off my record would cost me $650.00.

I think Officer Nelson is using his badge to do whatever he likes. It’s sad that it cost me a job because he didn’t know the law he was hired to uphold. I’m just amazed that doing nothing more than pointing my finger and knowing the law could cost me so much.