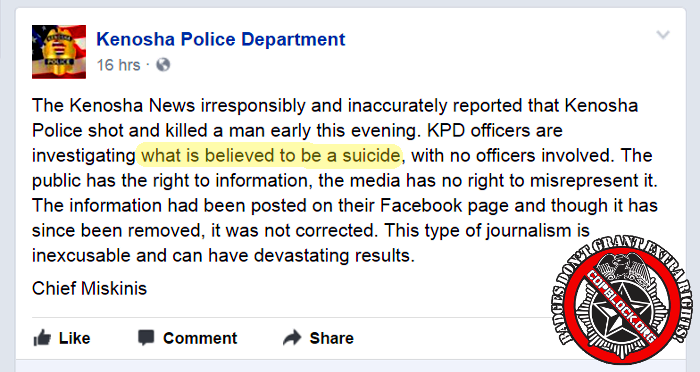 Irony knows no bounds, and the police chief in Kenosha, Wisconsin knows not his own irony.

Riding the “fake news” train and high on censorship, Kenosha Police Department recently took to Facebook to decry a premature report by media that led the public to believe there had been an officer involved shooting.

The Kenosha News irresponsibly and inaccurately reported that Kenosha Police shot and killed a man early this evening. KPD officers are investigating what is believed to be a suicide, with no officers involved. The public has the right to information, the media has no right to misrepresent it. The information had been posted on their Facebook page and though it has since been removed, it was not corrected. This type of journalism is inexcusable and can have devastating results.

“what is believed to be a suicide”

So without completing their investigation, Miskinis was fine with reporting how he thought the man might have died, then in the exact same paragraph he chastises local media for reporting an unconfirmed account of how they thought he might have died. Yeah, that is pretty consistent, ain’t it?

Or perhaps Miskinis feels entitled to report on the cause of death since his agency will get to make that determination, regardless of what actually happened, and he already knows the final results?

Maybe it was a suicide, but the investigation is incomplete so why report that?

Or maybe they killed the guy and now they are mad at the media for interfering with a perfectly good cover-up?

From the most recent federal censorship legislation, to Facebook’s new algorithmic censorship, now seems to be the time to use officious labeling to silence all dissent. Even local police departments are now trying to cripple the local media, who are almost always compliant with their narratives anyhow, in order to extend the police state monopoly on violence into a monopoly on information as well.

Under the false flag of pretending to protect you from “bad information” government is rapidly deeming itself the only valid source of information. That seem like a problem at all to you?

If Brave New World, 1984 and Farenheit 451 all had a book baby together – it would look exactly like the kind of Dystopic Facist Idiocracy that is already well under construction.