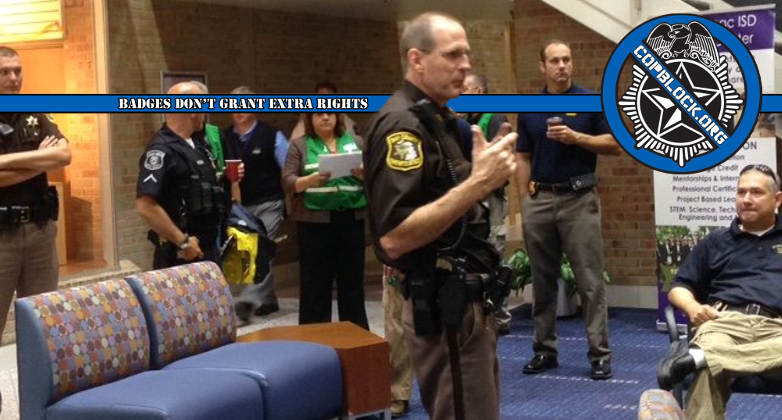 Bay County (MI) Sheriff’s Deputy Adam J. Brown was arraigned yesterday on on three separate charges relating to an incident last month in which he accidentally fired of a round from his personal .380-caliber Sig Sauer. Those charges consisted of tampering with evidence, a four-year felony; careless discharge of a firearm causing injury, a two-year high court misdemeanor; and careless discharge of a firearm causing less than $50 in damage, a 90-day misdemeanor.

After discharging the firearm while playing with a machine inside Bay City Western High School and Middle School, Brown then tried to destroy evidence and failed to tell teachers he was the one that had fired the shot. As a result, the school was placed on lockdown under the assumption that someone had fired a gun toward the school from outside.

Deputy Brown was the school resource officer, whose job it is to protect the students, at the time of the shooting. The bullet from his negligent discharge traveled through a wall into the next classroom and hit a teacher in the neck. However, the teacher was uninjured except for a scratch where the bullet hit her. After the spent bullet was given to Brown by school officials to preserve as evidence, he took it and threw it outside the school in an effort to cover up that he was responsible for the shooting

Following a Michigan State Police investigation, the report was filed with the Bay County Prosecutor’s Office. To avoid any conflict or appearance of impropriety, staff in Bay County requested a special prosecutor. State Attorney General Bill Schuette on Nov. 29 signed an order granting the request, appointing the Tuscola County Prosecutor’s Office to the task of determining whether charges are warranted.

Police reports obtained by MLive/The Bay City Times via a Freedom of Information Act request state Brown, the school’s resource officer, at about 12:30 p.m. on Friday, Nov. 11, was in the school’s robotics classroom with another teacher. They used a force machine to test the trigger pull on Brown’s personal Springfield EMP 9mm handgun.

The pair left the room, only for Brown to return alone and use the machine to test the trigger pull on his .380-caliber Sig Sauer, another personal handgun that he brought into the school. The gun was not empty of bullets and the experiment caused the gun to fire a round through two pieces of drywall. The projectile entered a classroom containing about 30 students, traveled toward the ceiling, scraped a tile, proceeded to hit a cement wall, ricocheted off it, careened across the room, and struck a teacher Brenda Amthor in the neck.

Amthor was sitting at her desk when struck by the bullet. She was uninjured apart from a small scratch, police reports state.

Though Brown was engaged in conversations with school staff on the projectile’s origin, he did not admit to having fired a gun, reports indicate. As a result, the school was placed in secure mode while administrators attempted to discern what had happened.

School staff gave Brown the bullet to hold, but he then tossed it in a grassy area covered by leaves, according to police reports. A K-9 Unit recovered the bullet.

“During this incident, Adam did not initially confess to discharging his weapon,” wrote Detective Sgt. William Arndt. “He confessed after being confronted by school administrators. Adam also admitted that he attempted to destroy evidence when school administrators gave him the fired bullet to protect. Adam left the school building, placing the fired gun in his personal vehicle, and threw the fired bullet into the school lawn in an attempt to thwart the investigation.”

Arndt spoke with Brown, who was “extremely emotional and explained that he had been in contact with his union representative who had advised him not to provide a statement. He did say, ‘It was a total accident.'”

Deputy Brown, who led a “live shooter” school training drill in August of 2015, was of course named Officer of the Year in May of 2012 by “Crimestoppers of Bay County.” They obviously have a pretty good vetting process for that award, since almost every cop that gets indicted seems to have one of them on his resume.