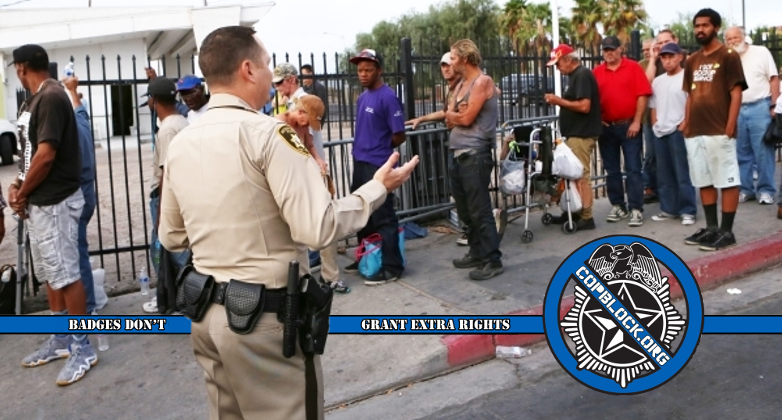 The following post was written by Jonas Rand, a UNLV student and member of Food Not Bombs Las Vegas. It was originally posted at “The World as seen by Jazoof,” a blog maintained by Jason Nellis under the title “‘Take What You Need and Leave Right Now’: Raids Target Local Homeless Encampment.”

It details one of the sweeps that the Las Vegas Metropolitan Police Department conducted against homeless people at a local park that members of Food Not Bombs Las Vegas hold one of their weekly picnics, in which they share food with hungry people, including those who do not currently have permanent housing.

During this sweep, the people within the park were given only given one minute to gather their belongings before police threw them away. In particular, officers from the LVMPD stole blankets, tents, and other cold weather necessities from those people. In addition, at least one person, an elderly disabled woman, had her pet dog and sole companion stolen from her.

This raid was carried out just before Christmas and during a time when Las Vegas is experiencing record low temperatures. Instead of allowing people a reasonable amount of time to remove their belongings or storing them for 30 days, as the law stipulates, those possessions were simply thrown in a dumpster, without regard for the hardship it would create for those who were then without shelter from the cold.

This sort of raid, as well as other types of harassment against and bullying of homeless and poor people by law enforcement in Las Vegas, is not an isolated or even unusual occurrence. Essentially, they seem to operate under the assumption that if they make life difficult for homeless people within the city they will just go away. However, they obviously have nowhere to go or they wouldn’t be homeless in the first place.

According to several witnesses and former inhabitants, all of whom wished to remain anonymous, a raid by the Las Vegas Metropolitan Police Department (LVMPD) two weeks ago forcibly drove out a group of people camped in a local park consisting of over two dozen individuals, dispersing them and discarding their belongings.

For those who had been residing in East Las Vegas’ Molasky Family Park, located near the UNLV campus, December 8 seemed not unlike any other day. With little to shelter them from the windy winter weather, the park’s street-dwelling residents fell asleep as night descended, expecting nothing new the next day.

That all changed in the early hours of the following morning, when several witnesses say they were awakened to the sound of Metro officers raiding the park to forcibly disperse the park’s homeless population. Perhaps as many as 40 people had been present in the park the previous night.

Park residents report waking to a chaotic scene. They recalled having to move heavy loads of their belongings quickly, after being given only 60 seconds to remove their belongings, with those who failed to comply in time receiving citations.

Those present in the park at the time of the Dec 9 raid said on Tuesday that the unanticipated police action involved the officers arriving while they were asleep/ The police seized many of their personal belongings, including tents and blankets, which were seen being thrown in a dumpster, according to witnesses.

Park Police and LVMPD officers were in the park on Tuesday from approximately 10am to 12pm, when one person was arrested on an outstanding warrant, and confirmed that an action to move on those who had taken up residence in the park was planned as early as December 1. According to Metro’s Sergeant Ryan Cook, the park was singled out for action at a meeting that day of the County Multi-Agency Response Team (CMART), a local police unit which includes multiple county agencies.

Sgt. Cook stated that the action was in response to “people who take up residence in the park and diminish the quality of the park for everyone else who […] would like to utilize this park”. The goal of the action, he said, was to “link the individuals […] who are utilizing the park as their home, to Help of Southern Nevada”, a local charitable organization which provides services for Las Vegas residents affected by homelessness or housing instability, to provide them with services, including housing in shelters or apartments, which he said had been prepared for at least some of the displaced individuals.

Meanwhile, individuals who were awakened to the raid and who were also approached by police Tuesday reported that volunteers with Help of Southern Nevada were not present at the park at the time they were announced to be coming.

“A couple more police came[…]. They said Help of Southern Nevada would be on their way, that they were going to be there, within 10 minutes, right where we were at. Then I went to the other side of the park, I came back and then they told us “oh, they’re going to be on the opposite side of the park, in 20 minutes”, a previously quoted witness to the raid who was in the park at the time, said later on Tuesday. “We went back to the other side [to meet with them], and they never showed up, we waited [about] an hour. They never came”, he said.

That witness, alongside another witness to the raid who was also present for the police visit on Tuesday, also said that the police were there to inform them of a sweep planned for the next day by the Park Police, to clear out remaining residents. The former camp resident reported that one policewoman’s comments on Tuesday to those who had returned to the park brought up families visiting for the holidays as the reason that he and others had to leave, describing returning individuals as “a deterrent”.

It was not immediately clear whether such a sweep happened; however, sources present the following morning saw no presence of police nor evidence of action to clear the park.

While multiple former residents of the encampment had reported that there were several previous visits by police, none seemed to indicate that there was warning the previous day of what was to come. There were perhaps 5 prior visits, the witness previously quoted said, and that each time, people were told to leave. One head police officer was reported to have repeatedly said “Not on my watch”.

One day before the raid, police came by and awakened everyone, according to another witness, who had lived in the park for approximately 2 years. She said that she had also been given misinformation, namely that the raid would occur on the 16th, a week after the raid, and that Park Police had raided two weeks ago.

But at no time did they announce that they were intending to clear the encampment that Friday, and there was no indication that property would be seized. Sources also reported citations given to individuals who did not leave with their property fast enough, including a deaf resident whose belongings were seized and discarded.

“There’s lots of people in that park that really need help, and they’re not getting it. A lot of us, we’re having hard times right now. Trying to get back on our feet”, said one of the witnesses interviewed Tuesday.

The same witness also reported that he knew of no one who was housed by Help of Southern Nevada as of yet, and that many would refuse to go to shelters. According to the former park resident, the group had only sent one representative once, to inform residents about their housing services. Among the reasons people have not been willing to accept housing options offered by Help of Southern Nevada are the presence of bedbugs in shelters as well as restrictions on pet ownership in available housing options.

Cook, who works in the community-oriented policing section of Metro, commented that “when we have individuals that utilize the playground equipment for sleeping places, and kids can’t enjoy the slides, and things like that, is when park police and us get called, to try to help resolve the situation and get people to where they need to be”. He brought up the services that Help of Southern Nevada provides, including a new triage center.

Asked how he felt about the action, he said, “I think it’s positive. I think it’s positive that the park is being used for what it was actually initially designed for, which is recreation and entertainment for all the residents. Not private living facilities.”

Still, however, not everyone is pleased. An additional onlooker who witnessed the raid, noting that displaced camp residents would simply re-locate, said Monday, “They’re not fixing the problem, they’re just avoiding the problem.”

Sgt. Ryan Cook gets a little creepy while talking about a traffic stop