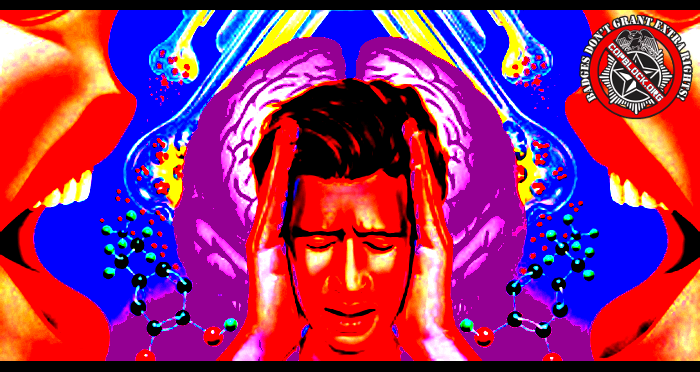 Is the reason that so many cops kill out of fear for their life because the stresses of their job lead to hallucinations of dangers where none exist?

Yesterday in an article I shared the work of a police psychologist who speaks of hypervigilance, a state of heightened awareness and readiness to react that is a necessary part of the policing career, and which often leads to psychological issues for individual officers. As I researched hypervigilance a bit further I discovered that it also has some other pronounced cognitive side effects.

The following scientific publication describes in detail the link between hypervigilance and hallucinations:

Auditory Hallucinations in Schizophrenia and Nonschizophrenia Populations: A Review and Integrated Model of Cognitive Mechanisms

A strength of this model is the differentiation between signal detection and response biases, consistent with the idea that attributions must be differentiated from earlier processing stages. It is also compatible with the above models because self-monitoring problems might contribute to incorrect decisions about the source of information, particularly for predictive mechanisms linked to self-generated actions. Recent versions of this SDT model posit that perceptual hypervigilance (perhaps linked to anxiety) enhances biases in responding and thus produces a higher likelihood of errors in cognitive processing and of accepting a signal as real. The desire to reduce uncertainty under threat also leads to increased detection of ambiguous signals, a reduction in auditory threshold, and thus hallucinatory experiences.

Whether or not police are actually under a real threat does little to remedy the cultural and official narrative of the dangers of policing. Being told that you will constantly be in danger causes you to react as though that were true, and especially when those reactions are tied to instinctual impulses manufactured in police training exercises that essentially teach officers to identify when they are allowed to kill. Under so much pressure to be prepared for self-preservation, hypervigilance becomes a reasonable perceptual model, but as we see, it can also lead to imagining those fears where they do not actually exist.

However, hallucinations are probably something that we are all experiencing most of the time. In order to process the infinite number of signals in our environment we must ignore most of them and reorder our environment to match our expectations in a way that allows us to function within them. In fact there is evidence which highly suggests that we do not even perceive reality, but just our individual models of a reality that lead us to higher chances of evolutionary success.

Our individual worldview of reality has been referred to as ‘reality tunnels‘, perceptual constructs in which all that we can see in reality lies inside the walls of what we already believe reality to be.

So the reality tunnel of police, that their lives are in constant danger and bad guys are everywhere waiting to get them, is itself a hallucination. One that leads to other dangerous hallucinations that get people killed. Which then leads to distrust, and before long the threats to police begin to manifest as equal reactions to the hallucination-predicated ‘responses’ of police.

A self-fulfilling prophecy, a perpetual motion machine made of fear and death.

The very idea of policing, the very symbol of it, is toxic to its core. It promotes a worldview which escalates an increasingly dangerous and inhumane reality.

We get out of the world what we put into it, and if we put fearful hallucinating people with authority in it to protect the haves from the have-nots, we are certainly going to get the world we ask for – but probably not the one that any of us wants.

Policing is humanity admitting defeat against its own hallucinations.