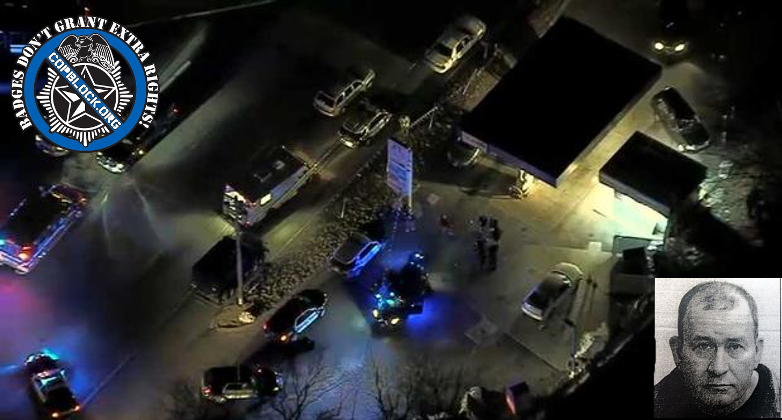 A Quincy, Massachusetts police officer is behind bars after a late-night standoff with with fellow police officers. Officer Keith Wilbur has officially been charged with ‘armed assault with the intent to murder’.

At around 9pm on Monday night, Raynham officers were called out to Officer Wilbur’s home for a domestic disturbance call. Upon entry, Officer Wilbur was found hiding out in his basement, drunk, and had several weapons in his possession. When officers tried to make contact with Officer Wilbur, he threatened to kill the responding officers and fired at least two shots.

In an attempt to engage the male party who was not in the same room, they received two shots fired through the door. Both police officers took the female and exited the house.

Police ‘negotiated’ with Officer Wilbur for approximately three hours before he surrendered. There were no reports of injuries.

Officer Wilbur  an 18-year veteran of the Quincy Police Department, and is now on administrative leave until the investigation is completed.

Below is the incident report from Officer Peter Beatrice:

On the above date and time, I (Sgt. Peter Beatrice) was ordered to work per I am responding as a Crisis Negotiator for a armed barricaded suspect. I then traveled to the command post at  Stop and GO gas station.

I then got a quick briefing by Chief Donovan and Sgt. Pacheco.  I was informed the suspect was Keith Wilbur, a Quincy Police Officer.  I was former informed that the suspect had fired shots at officers who were on the scene for a well being check called in by his wife.  I then began to set up a Negotiator operations center in my cruiser at the back of the parking lot. I then was informed a colleague and friend of the suspect had arrived on scene, Officer Bruce Tait.  After speaking with him I believed he would be useful in negotiating with Keith.

We then were able to get Keith on the phone. During the approximately three hour phone call Keith made several statements of shooting it out with us and dying in a blaze of glory.  He also stated he had “lots of guns and ammo” and that officers better be ready if they attempt to enter his basement.  He also told us that he was loading magazines, which we could hear over the phone, and that he would shoot a cop in the knee in order to be shot by another officer.  During the first two hours of the negotiation Keith constantly spoke about committing suicide by cop. Finally after approximately three hours Keith agreed to submit to arrest.