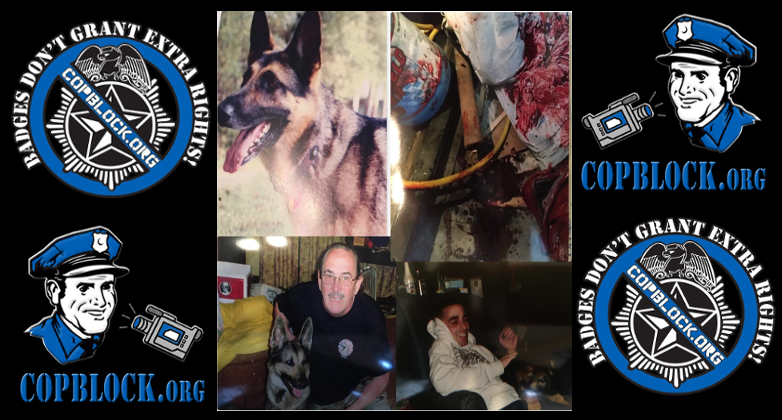 The following Post was shared with the CopBlock Network by Matt Albert, via the CopBlock.org Submissions Page.

A Bloody Christmas – This Is How Police Treat Our Veterans

After serving 37 years in the military, one would think that Gary Aljoe was entitled to spend a quiet Christmas with his family and his beloved best friend, an 8-year-old-male German Shepherd, whom Aljoe had owned since he was a pup. The dog had been given to him as a present by Aljoe’s son, and was appropriately named Sarge. For Gary himself had achieved the esteemed rank of Sergeant First Class, and one would think that this country would give back the so called freedoms Aljoe had fought for by allowing him the comforts and enjoyments of his own family and home this holiday season. If one thought that however,…one would be wrong.

In the early morning hours on December 21, 2016, the Buffalo Police Narcotics Unit stormed Aljoe’s Ullman Street residence by way of a flash bang, taking the brave sergeant and his animal by surprise. Sarge, usually a very friendly and social German Shepherd, cowered in the corner at the sudden attack. Aljoe initially thought that he was being invaded and was set to call the police. It turned out that his instincts were half right.

And again, if one thought that the Police would show mercy on what they perceived to be an enemy combatant cowering in the corner, one would also be mistaken. A Buffalo police officer, name unknown at this point, blew up Sarge while Gary laid helpless on the floor, with a jackbooted cop standing over him, holding him down.

The mirage of freedom that Aljoe had fought for 37 years was shattered by way of gunshots from agents of his own government to his best friends’ head. This wasn’t friendly fire… this was the purposeful execution of a companion animal.

Aljoe has seen a lot over the course of his 37-year tour of duty. He had built schools and clinics in war torn nations such as Panama, and while others ran from midtown Manhattan in the wake of 9-11-01, Aljoe came to the scene to provide security for the four months immediately after the tragedy. However, nothing he saw prepared him to witness the savage slaughter of his best friend, by so called men, who should be wearing prison uniforms as opposed to police.

Aljoe has replayed these events in his head every single day, unable to fathom the brutality of the Buffalo Police Force. He is scheduled to begin extensive counseling at the VA. Meanwhile, the officers found the situation to be far more comical, laughing about the matter as they quickly bagged up Sarge to try and keep any testing being done on the body; testing which would prove the unjustifiable nature of the attack on a dog that was laying down helpless on the floor.

As previous Artvoice reports have established, this is nothing new to the Buffalo Police Department. For they have done this thousands of times over the years, and have the art of killing canines down to a science, with the help of the Buffalo Animal Control and the SPCA. Yes, the SPCA. If one were to think that the SPCA, the one agency in society whose creed is to protect animals above man, would be outraged about this barbaric practice, one would again be mistaken.

In fact, the SPCA has assisted Buffalo Police in the destruction of evidence time and time again, and helped cover up these brutal crimes for all these years. They have an incinerator designed specifically to make the dogs’ remains, and any hopes of justice… go up in smoke. After Buffalo Animal control bags up the bodies, they then take the lost souls to the SPCA for incineration.

Luckily, Aljoe contacted me in time for intervention and we will be ushering Sarge to Cornell for an independent Necropsy to be done. Private citizens are realizing more and more that they need to rely on other private citizens for hopes of obtaining traditionally American values, such as freedom and justice, and not law enforcement and quasi law enforcement agencies such as the SPCA.

To underscore that point, Erie County SPCA Chief Veterinarian Helene Chevalier actually has a forensic certification and can perform the analysis needed to determine how Sarge was shot; what position he was in when the officer fired. However… the SPCA has planted themselves firmly on the side of the cops on this one, forcing the difficult task of transporting Sarge across the state for any hopes of justice.

The SPCA, through email correspondence from Assistant Director Beth Shapiro, indicated they intend to handle this matter by working “with the Buffalo Police,” and “offering training.” Evidently, they overlook the fact that the Police have denied all efforts for training over the past 10 years… indicating that the choice to kill dogs is simply just that… a choice.

Perhaps Buffalo Police were in a particularly giddy mood that morning so close to Christmas, as a Federal Appeals Court in Michigan had just handed down quite the gift to law enforcement, in the form of a decision that has left dog lovers across the country howling in anger. The appeals court ruled that police can shoot and kill dogs upon entry into an individuals’ home if the dogs barks or moves. While paralyzed and mute dogs may still be safe, the rest of us are not.

The grand bounty that the Buffalo Police claimed for the stripping of this proud veteran’s pride and the loss of this beautiful German Shepherd’s life? A bag of cocaine residue, which police try and attribute to Aljoe’s son, who lives at the residence. It’s funny how all these so called drug dealers don’t actually have drugs in their houses…but rather, empty bags of residue. If one didn’t know any better, one could surmise that these bags are planted by police to try and justify their lawless invasions, canine kills, and mass arrests of the poor and downtrodden. If one didn’t know any better, one could easily come to the conclusion that there is no justice…there is just us.