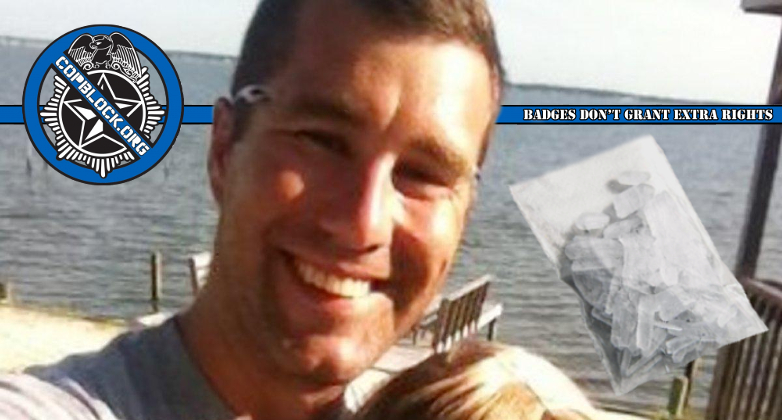 Three days into his new job as Roane County (WV) Sheriff, Matthew “Bo” Williams had a bit of a workplace incident when he was arrested for stealing meth at the police department he worked previously. Although Williams has vowed to fulfill his duties as sheriff “to the best of his abilities,” that’s bound to be no easy task now.

For one thing, he’s been banned from even entering the sheriff’s office by a court order filed by county officials as part of their efforts to have him removed. Then there’s the whole facing jail time (he’ll get probation and a trip to rehab, if even that) for drug-related crimes thing. That can be awkward when you’re briefing the department’s drug task force on their assignment for the day.

He is accused of stealing more than $1,000 in evidence, the majority of which was meth, at his previous job as an officer in Spencer, W.Va.

A criminal complaint against Williams filed Tuesday says that evidence bags with case numbers matching the missing evidence were found in his desk and car.

The Roane County Commission voted Tuesday to remove their new sheriff, citing a law that allows them to do so for drunkenness or drug addiction

A resolution seen by the Charleston Gazette-Mail says that Williams admitted to the theft and having more than a yearlong addiction on Nov. 26, but was still sworn in at the end of the year.

Besides the charges of grand larceny he’s facing, all the cases he was involved in as a member of the City of Spencer Police Department prior to being elected are now being scrutinized. Sheriff Williams has since resigned from the SPD and at least two of those cases being reviewed have been thrown out, as a result of his involvement. Williams, however has refused to step down as sheriff and is forcing the Roane County Commissioners to go through the formal process of removing him.

On Wednesday, Sheriff Williams was interviewed by WSAZ NewsChannel3, where he discussed the “personal and professional problem” he’s having right now and his determination to not step down and instead to carry out his duties as sheriff:

Rather, for Williams, the criminal complaint against him speaks for itself, revealing an elected officer of the law charged with stealing drug evidence from his last job with the city of Spencer Police Department and admitting to using meth for more than a year.

On Wednesday, Williams chatted with WSAZ for his first interview since an investigation was launched into his connection with the missing evidence. With the investigation still active, Williams says he is not able to comment on how any drug problem began.

Instead, he says, he’s still planning on fulfilling his duties as sheriff, even amid calls for his resignation.

“My intentions are to do what’s best for my family,” Williams said. “I understand concerns that might be in the public, but my plan is to do the best job I can do for the citizens who elected me and as things play out, what will be will be.”

Sounds like he’s probably learned his lesson and the public’s concerns are obviously unfounded. Surely, the County of Roane is in the capable hands of a real clear thinker. He couldn’t possibly be delusional from habitual meth use.