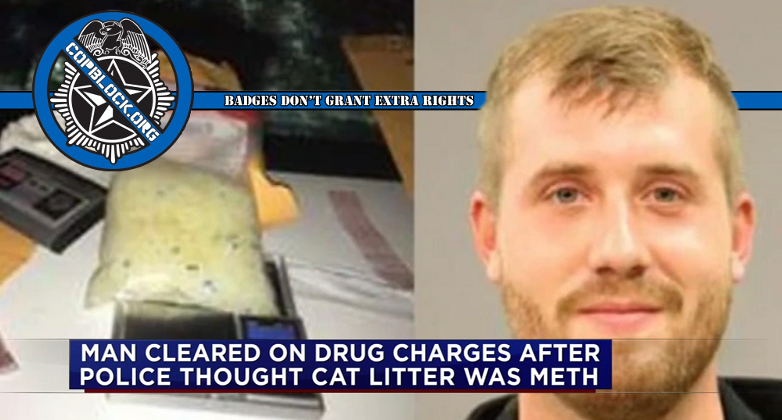 A sock full of cat litter ended up leading to a Texas man being publicly branded as a drug dealer, when deputies with the Harris County Sheriff’s Office managed to mistake it for meth. In yet another case of faulty field tests that have repeatedly been exposed as wildly inaccurate, police issued a press release and bragged on Facebook about how their “big drug bust” had kept everyone’s children save from the scourge of methamphetamines.

Meanwhile, Ross Lebeau was taken to jail on charges of drug possession with the intent to distribute, based on the “meth” weighing in at over half a pound. As a result, he lost work and will be forced to go through the process of having his record expunged, even though the charges were dropped, to avoid the stigma of having been identified, very publicly, as a drug dealer.

In spite of that, Lebeau is surprisingly unwilling to place any blame on the deputies who used notoriously innacurate equipment to declare the cat litter was an illegal substance. For their part, the Harris County Sheriff’s Office released a second press release, in which they had no problem whatsoever placing the blame squarely on Lebeau’s shoulders saying that the deputies did everything right and that his statement that he didn’t know what the “unknown substance” was is what was responsible for the mix-up.

Lebeau and his attorney do not blame the deputies for the ordeal, rather the field tests.

“Ultimately it might be bad budget-cutting testing equipment they need to re-evaluate,” said George Reul, who added prosecutors practically laughed when he told them it was cat litter.

He says the accusation has caused him to lose work, not to mention the embarrassment. He will work to expunge his record.

“I was wrongly accused and I’m going to do everything in my power, with my family’s backing, to clear my name,” he said.

The drugs were recovered and in the process of inventorying his vehicle a substance was found wrapped in one sock in his vehicle. Mr. LeBeau was questioned about the contents at which time he indicated that he had no idea what it was. The deputies followed proper procedures and field tested the substance on two separate occasions which field tested positive for methamphetamines, notified the District Attorney’s Office who accepted charges for possession of controlled substance of 200 grams and Mr. LeBeau posted bond and was released.

During the investigation Mr. LeBeau failed to identify the substance and later, after being released indicated on social media that the substance was cat litter that he kept in a sock in his vehicle.

Regarding this incident all indication shows that the deputies followed basic procedures and followed established protocol related to this incident. Because of the established procedures in place and this contraband was submitted to the Institute of Forensic Science it was determined not to be methamphetamine and charges were dismissed.

It doesn’t look like he’s going to get that apology. At least the prosecutors were able to get a good laugh out of it.