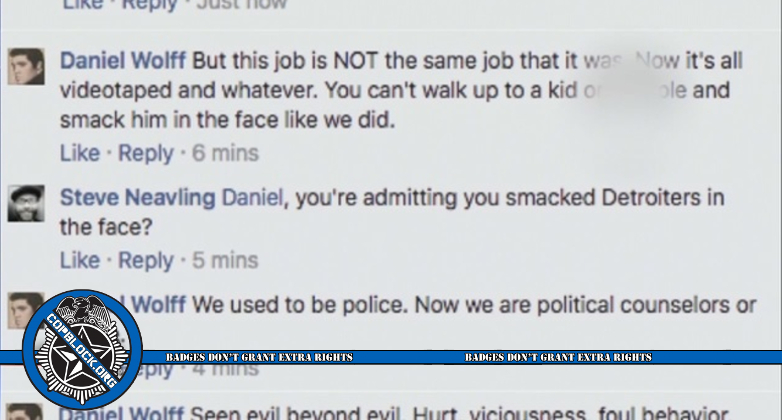 Detroit Police Officer Daniel Wolff is in a bit of hot water after he got offended by an article discussing how many police now live in the suburbs, rather than the city in which they work. He then posted comments to the article in which he called the residents of Detroit garbage and lamented the good old days before it was routine for cops to be filmed as they perform their duties and could “walk up to a kid or asshole and smack them in the face.”

In a previous comment, he also stated that he “hit them in the head with handcuffs” while apparently responding to another person’s comment. Other posts included racist comments, such as his desire to send a Terminator back in time to kill “Whoppi” Goldberg and Al Sharpton’s parents and stating to another commentor who said his posts sounded racist that it didn’t matter, because his “Chaldean ass will be deported soon enough.”

He also expressed a desire to be fired after he was told that screenshots of his comments had been sent to internal affairs. That’s not a very unrealistic goal at this point.

Wolff, who works in the second precinct and lives in the suburbs, said he would never live in the city he serves because it is “just a nasty place.”

“Getting rid of residency was the best thing that ever happened to the Detroit Police!!!!! We have to police the garbage but you can’t make us live in the garbage.”

Wolff bemoaned cell phone cameras, saying, “You can’t walk up to a kid or asshole and smack him in the face like we did.”

Motor City Muckraker alerted police to the posts, and the screenshots were sent to Internal Affairs. Police spokesman Michael Woody said there would be “a full investigation.”

Wolff said he worked for DPD for more than 20 years.

In other Facebook posts, Wolff , who is white, said he wanted to “send a terminator (Cyberdyne series 101) back in time to take out Whoppi Goldberg and Al Sharpton’s parents.”

When someone said the post sounded racist, Wolff responded, “Don’t matter anyways, your Chaldean ass will be deported soon enough” and then called him “a little girl” and declared, “you should die.”

Wolff, a fanatic Donald Trump supporter, said he’s tired of “politically correct cry-baby soft ass snowflakes” and made a “personal pledge” to “do my best to offend at least one person a day with a harsh comment. … I want to make someone cry today.”

When I told him that Internal Affairs was investigating, Wolff responded, “Please do. I’ve been trying to get fired for years you cunt. Help me you ass.”

During his psychotic little rant, he also complained that people weren’t watching enough John Wayne movies and used enough homophobic slurs to make one wonder if he might be overcompensating for something (perhaps something he keeps in his closet). His Facebook page has since been deactivated.