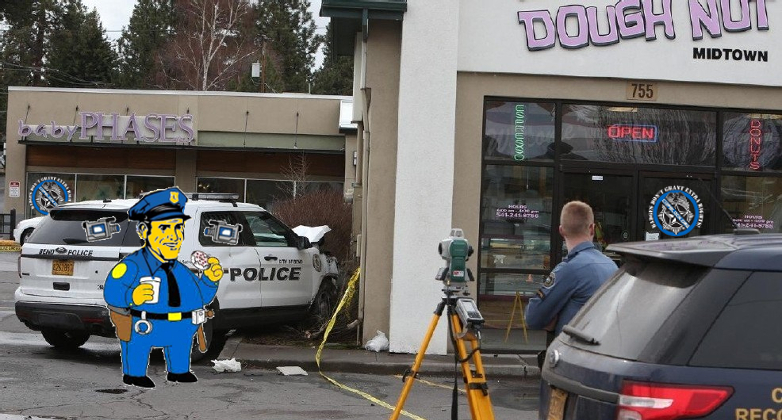 Cpl. Robert Emerson, of the Bend (OR) Police Department, was apparently in such a rush to get his daily sugar rush that he sped through a red light, smashed into a truck, hit a pedestrian, and then crashed right into the donut shop. According to Bend Chief of Police Jim Porter though, this was just “one mistake within an otherwise exemplary career” for Emerson. So, he seems to have gotten a handle on his cravings.

Yeah, the jokes kinda write themselves on this one (via KATU.com):

Emerson was cited after the March 5 crash and paid a $260 fine. Emerson collided with a pickup truck, slid across an intersection, hit a pedestrian and smashed into the Dough Nut shop, Oregon State Police said. No shop employees or customers were injured. Both Emerson and the pedestrian were taken to the hospital with non-life-threatening injuries.

Emerson had been on duty for about an hour at the time of the crash and was the supervisor of four other on-duty officers. A report of a stolen vehicle that had fled police had come in just before the crash. In a written statement, Emerson told state police that he believed the driver of the stolen vehicle was impaired and he wanted to get in front of the driver to deploy spike strips.

Data from Emerson’s squad car computer show he was traveling 66 mph in a 35 mph zone with lights and sirens on for 1.5 seconds before he T-boned a green 1997 Chevrolet truck.

Porter said Emerson made a mistake, but he was an otherwise exemplary officer with eight citizen commendations and 10 internal commendations over his 13-year career. Porter said this is Emerson’s only violation.

“In his zeal to apprehend suspects he could have been more alert to his situation,” Porter said. “His intent was to try and arrest felons, not to try and better a personal agenda.”

As far as I can tell from media reports, no donuts were reported injured as a result of this unfortunate, out of character, heroic incident the likes of which Cpl. Emerson has never been involved in before or since, nor ever will be. Chief Porter really wants to make sure you understand that.