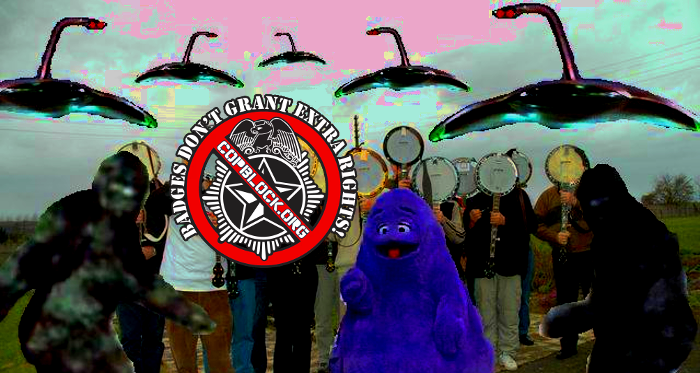 For as long as there have been police there have also been strange reports by them of otherworldly phenomena from ghosts and aliens to bigfoot and men in black; which could be explained by the nature of policing on the individual officers mental states.

Police officers have reported on numerous paranormal phenomena over the years. As a profession they seem more likely to believe in otherworldly happenings than anyone but professional podcasters and late night radio hosts.

Here are some lists of police encounters with things that stir in the Twilight Zone:

Dear police officers of Reddit, have you ever responded to a call for paranormal reasons?

Police tell of close encounters with the unexplained

And that is just the tip of the iceberg. Stories shared by police of supernatural experiences are everywhere. In fact many paranormal researchers use this as evidence that there have been reliable sources reporting the things they believe to be true. The reasoning is that if police believe something, it must be credible.

However police may be the very least credible witnesses due to the fact that they are more prone to hallucinations than most everyone else. Last week I spoke about a phenomena that almost all police are vulnerable to called hypervigilance, which is a heightened state of alertness and readiness adopted by those who perceive themselves to be under constant threat. As it turns out hypervigilance has been clinically related to a higher likelihood of experiencing hallucinations.

The Scientific Reason Cops Are Highly Vulnerable to Experiencing Hallucinations

While the association between policing and the paranormal has been attributed to getting called to such scenes more frequently than other statistical groups, this explanation entails that all of the paranormal phenomena police reported are in fact absolutely true and real. Although I am open to the possibility of anomalistic events, surely at least half of these police reports are less than factual.

Therefore the better explanation is that police encounter the unreal so often because the pressures of a policing career make officers vulnerable to experiencing the unreal.

Hypervigilance also leads to being more suggestible, so police are likely to take cues about what they are expected to see from people who call them. Police have also been trained to look for the abnormal, which also makes them more suggestible to encountering it.

Another recent incident might be a good illustration of this feedback loop of belief.

Last October an elderly woman and her caregiver began to experience hallucinations. Two responding officers took her to be treated only to begin experiencing hallucinations themselves, which later also happened to a hospital worker treating them. No cause has been found despite detailed investigations.

Understanding how an ill 78 year old might experience hallucinations is not difficult. It is also not a stretch to think that the pressures of caring for someone regularly experiencing hallucinations might have made the caretaker more vulnerable to them, especially if there were other unknown psychological pressures. From here we have police, trained to look for the abnormal while in a state of hypervigilance, puzzled how these hallucinations could have been passed along – until the psychological pressure of this puzzle meets the pressure of their job and then manifests as hallucinations. And the poor hospital worker, seeing not just two vulnerable people sharing the hallucinatory experience, but reliable officers experiencing it also, then becomes susceptible.

Given that no substances have been located and that psychology has long know about the tendency of groups to amplify hallucinogenic experiences, the feedback loop of belief seems a pretty good theory. But it also reveals how much faith people put in police, that their irrational experiences are somehow used to validate those of ours, for no other reason than a shiny badge which configures magical confidences.

More credibility is added to the link between hypervigilance, hallucinations and the supernatural by the other careers which seem to experience them more often than others: soldiers, pilots and other emergency responders. All of these groups are likely to experience high degrees of hypervigilance related to their careers, and all of them just happen to report on paranormal phenomena with startling regularity.

Do aliens, bigfoot, time travelers, lake monsters and other things actually exist? I don’t know. I am certainly interested in the paranormal, but not necessarily because it describes true events, but because the experiences themselves reveals something about human consciousness. What we believe and why is a fascinating mystery that can only be explored with an open mind. And what we might find in investigating our beliefs is that they are influenced by the momentum of our daily lives, and sometimes what looked like an alien craft following your squad car across Kansas County might really just be a bad side effect of thinking that you are always in danger and having everyone else constantly validate that view.

And if police are susceptible to seeing ghosts, aliens and the like – then they are also likely to hallucinate other threats and sensory phenomena. Making them not just generally unreliable observers and witnesses, but also deadly.

On a final note, remember when police across the U.S. were freaking out about creepy clowns?

Or how about witchcraft?