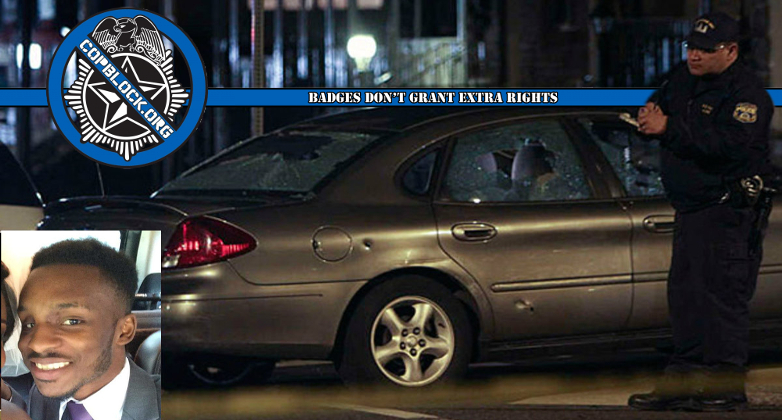 Last week, the Philadelphia Police Department agreed to the largest settlement in the history of the city to pay off an innocent man that two undercover cops shot at fourteen times. In April of 2014, Philippe Holland was delivering food when Officers Mitchell Farrell and Kevin Hanvey ran at him without ever identifying themselves as police officers.

Holland, having no reason to know they were cops and seeing that one of them was holding a gun, believed he was being robbed and tried to escape in his car. In spite of it specifically being against policy to do so, Farrell and Hanvey used the excuse that they “feared for their lives” from the car being used as a weapon to open fire on Holland. As a result, Holland, who was twenty years old at the time, now suffers from a permanent seizure disorder and still has bullet fragments lodged in his brain.

In spite of witness statements that contradict the two officers’ story, the district attorney (not at all surprisingly) declined to press any charges against them. Instead, they’ve been given a paid vacation for the past two years, while the slap on the wrist they will eventually receive from the department remains “pending.”

It is the largest settlement in a police shooting case in the city’s history, according to Philadelphia Law Department records.

Then-Commissioner Charles H. Ramsey said shortly after the shooting that Officers Mitchell Farrell and Kevin Hanvey had fired at the wrong man.

On Friday, the mayor’s office called the shooting “an unfortunate, regrettable series of events.”

“We will strive to ensure that tragedies such as this do not happen again in our city,” City Solicitor Sozi Pedro Tulante said in the statement.

Philippe Holland was delivering a cheeseburger to a house on the 5100 block of Willows Avenue in West Philadelphia on April 22, 2014, as police responded to reports of gunshots nearby.

In a deposition, he said he saw Farrell and Hanvey approaching him and thought he was about to get robbed. He slipped into his car through the passenger door, he said – and that’s when one officer shined a light into the car and Holland saw a gun in the other’s hand.

He told police that Farrell and Hanvey never identified themselves as police officers. He said that he panicked and tried to pull out of his parking spot – and that the two men opened fire on him, hitting him in the head and body.

At the time, it was against police regulations for officers to fire at a moving vehicle unless someone inside the car was threatening them or someone else with some form of deadly force other than the vehicle itself.

Hanvey and Farrell told investigators they approached Holland because they saw him walking past a Chinese restaurant on 51st Street and asked a witness on the street where the gunshots she’d heard had come from. They said the woman had pointed toward Holland and said the shots came from where he was walking.

But the woman later told police investigators she had only pointed toward the Chinese restaurant, and didn’t mention a man at all.

Hanvey and Farrell insisted that they told Holland they were police and that he drove his car toward them, making them fear for their lives.

Holland, a student at Delaware County Community College, was left with a permanent seizure disorder and has bullet fragments in his brain, according to his attorney, Tom Kline, who announced the settlement Friday.

The District Attorney’s Office declined to press charges in the case. According to police documents Kline provided to the Inquirer and the Daily News, the department’s Use of Force Review Board concluded that Farrell and Hanvey had violated department policy, though the board did not specify a punishment for that violation.

A police spokesman said that the two have been on administrative duty since the shooting, and that “discipline is still pending.”

The department could not say whether the officers will return to the street.

At least the taxpayers of Philadelphia get to pay for this “unfortunate, regrettable series of events,” while the two officers actually responsible for it have had plenty of time to sit home getting paid to think about what they did. That certainly should ensure that “tragedies such as this do not happen again” in their city.