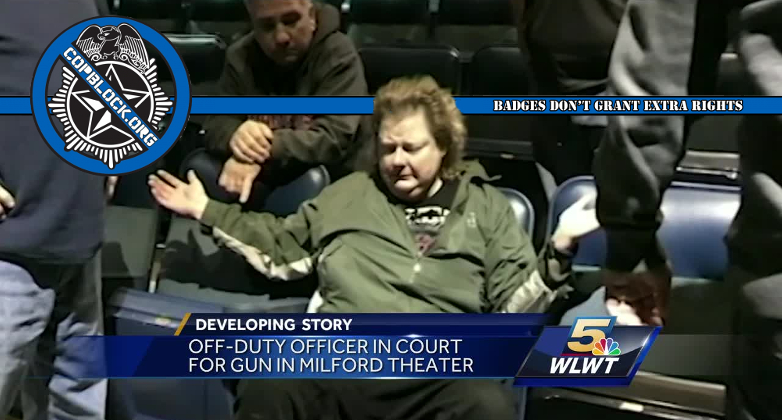 Sergeant Shauna Lambert of the Cincinnati Police Department was arrested last week after she showed up at a movie theater in Milford, began acting weird and harassing people, then dropped her department issued 9mm handgun. She was off-duty and drunk at the time.

Reportedly, her behavior included standing up several times during the movie and physically grabbing at least two other patrons, who attempted to move to another area to avoid her. Lambert responded by moving back toward where they were sitting, which is when she dropped the gun. There are conflicting accounts of whether she was attempting to pull the gun out at the time that it fell to the floor.

It’s also been revealed since this incident that this isn’t her first drunken, armed rodeo. In fact, she’s now been arrested twice within the past nine months for alcohol related offenses. Back in April of last year, Sgt. Lambert was arrested for driving drunk in Blue Ash, when she was caught speeding and driving over the median then refused to perform a field sobriety test or take a breathalyzer.

Via WLWT5.com (the local NBC affiliate):

Shauna Lambert, a 23-year veteran of the Cincinnati Police Department, was arrested in Milford on Friday. Witnesses told police Lambert had dropped a gun onto the floor of a movie theater during a showing of “Rogue One: A Star Wars Story.”

No bullets were discharged, and no one was hurt, but Lambert was charged with having a gun while intoxicated and inducing panic.

It’s the second blemish on her record in nine months.

On April 29, Lambert was charged with operating a vehicle under the influence after Blue Ash police Officer Jason Asbury noticed her car speeding across a median on State Route 126.

Officer Asbury tried to perform a sobriety test on Lambert, but the test ended abruptly when Lambert was asked to walk in a straight line.

Lambert refused to take a Breathalyzer test and pleaded guilty a few weeks later to an amended charge of reckless operation of a vehicle.

In spite of having pled guilty to that previous (conveniently “amended”) case and having a total of seven on-duty auto accidents (I’m thinking the same thing), Sgt. Lambert was kept on the payroll by the Good Cops within the Cincinnati Police Department, even though she still lost her license as a result.

In addition, although her personnel records contain glowing praise of her “strong sense of right and wrong” and willingness to impose that on others, as well as her exceptional standard of decision making by her supervisors, it also shows a history of citizen complaints filed against her, including one for “sustained discourtesy.”