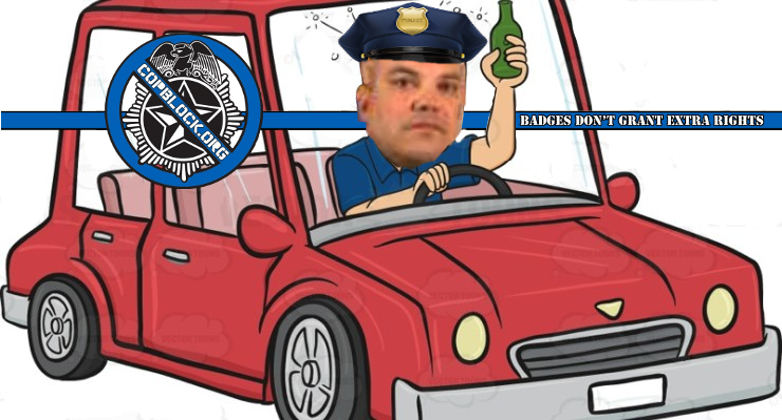 I’ve finally found a victimless crime that police are unwilling to enforce. Of course, by some odd coincidence that crime (along with several others that also weren’t enforced) was committed by another Hero in Blue.

In spite of admitting that he had been drinking and was sending a text when he ran into a parked semi in Temecula (a suburb of Los Angeles), a police officer from the Riverside Police Department wasn’t charged with driving under the influence or texting while driving. Nor was he charged with leaving the scene of an accident, even though he had to be tracked down to his house after the accident and at least one motorist had also called to report his car was “swerving all over the roadway” and had hit a curb.

Instead, Chad Milby‘s only punishment was being demoted from lieutenant to sergeant. Although the department used “privacy regulations” to avoid discussing it, or the $9,500 in damages he caused in the process, that presumably resulted from the fact Milby also was driving an undercover police vehicle at the time and hadn’t reported the accident, as is required.

The Riverside County Sheriff’s Department, which provides police services for Temecula, investigated the crash that happened the night of April 29 on Wolf Store Road east of Mahlon Vail Road.

When a deputy questioned Milby at his home later that night, he did not appear to be under the influence of alcohol, the sheriff’s incident report said.

Milby was not cited for violating the state Vehicle Code section requiring the use of a hands-free device to text because an officer must witness an infraction to write a ticket, said Deputy Michael Vasquez, a Sheriff’s Department spokesman.

The driver of the truck did not want to press hit-and-run charges, Vasquez said, so there was no victim. Some crimes, such as domestic violence, can be prosecuted with the state of California as the victim, Vasquez said, but hit and run is not one of them.

Milby, through a Riverside police spokeswoman, declined to comment for this story.

The deputy who questioned Milby, whose name was redacted from the report provided to The Press-Enterprise, said he was dispatched to a report of a hit and run involving a semi at 10:46 p.m. April 29. Two minutes earlier, the deputy wrote, there was a separate report of a silver car “swerving all over the roadway” and that the car hit a curb about a mile away.

The deputy examined the semi and found only a scuff on a tire. He also found pieces of the city’s car.

Milby reported the crash to the Riverside Police Department, the deputy wrote. The deputy did not specify when. Department policy requires crashes to be “promptly” reported to a supervisor and a collision report filed with the agency having jurisdiction where the crash occurred.

The policy also prohibits using take-home cars for personal errands “beyond a reasonable minor detour,” unless approved, and prohibits driving while impaired by alcohol or drugs. It also bans, without permission, drinking any alcohol within four hours before driving.

Milby told the deputy he had drank two beers between 6 and 10 p.m. before the crash.

The deputy contacted Milby in the driveway of his home in Temecula and said he noticed “an odor of either cologne or fragrant soap, preventing me from detecting an odor of an alcoholic beverage.” But Milby did not appear to be under the influence of alcohol, the deputy wrote.

Milby told the deputy that his airbag deployed when he hit some unknown object, but he did not stop because he did not see any vehicles or injured pedestrians. He did not immediately check for damage to his car. Milby could not explain why he didn’t report the crash to the Sheriff’s Department.

Milby called the deputy the next day to add that he was responding to a text message from his wife at the time of the crash.

The deputy subsequently talked with a second witness who said he saw a silver car with its hazard lights on and the airbag inflated “doing donuts” near the site of Milby’s crash.

It’s not exactly hard to figure out why he didn’t report the crash or hang around to talk about. Or, for that matter, why there was another odor preventing that unnamed deputy from detecting the smell of alcohol. I’m sure that deputy couldn’t put two and two together, either. I’m also rather sure that if anyone else admitted to drinking and texting while driving during an investigation of a hit and run accident in which witnesses reported their car swerving all over the road and doing donuts (the joke writes itself) with their airbag deployed nearby, they wouldn’t have charged them with anything at all either.